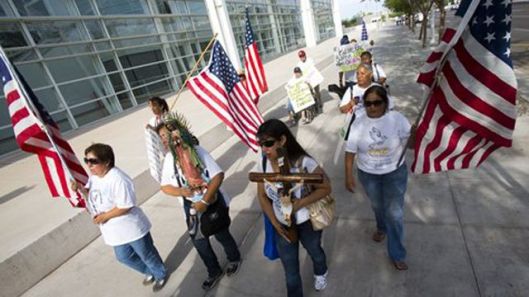 The press conference comes just days after the Federation for American Immigration Reform, an anti-illegal immigration group, released a report claiming the administration has worked for the past three-and-a-half years to undermine immigration enforcement. 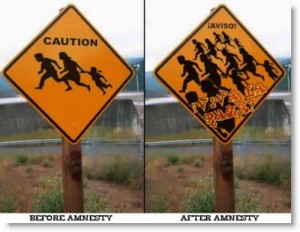 President Obama’s unilateral decision to implement parts of the failed DREAM Act legislation has allowed “dreamers” to game the system and stay in the U.S. illegally, according to two union leaders representing immigration agents.

Prosecutorial discretion for dreamers is solely based on the individual’s claims. Our orders are if an alien says they went to high school, then let them go.… Officers have been told that there is no burden for the alien to prove anything.… At this point we don’t even know why [the Department of Homeland Security] has criteria at all, as there is no requirement or burden to prove anything on the part of the alien.

We believe that significant numbers of people who are not dreamers are taking advantage of this practice to avoid arrest. 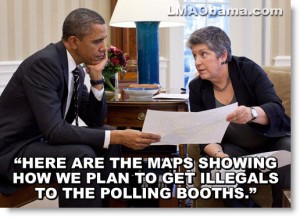 George McCubbin, president of the National Border Patrol Council union, added that the Department of Homeland Security has made it impossible for agents to do their jobs, with Crane stating that it’s led to disorganization and “confusion” at ICE.

Obama via executive branch fiat has granted effective amnesty to any illegal immigrant who claims that he or she came to America as a child. With no way to verify such a claim, America’s immigration enforcement officers are left powerless to enforce the actual immigration laws passed by Congress and signed by a President.

Beyond the practical problems, as Heritage previously stated about the Obama Administration’s imperial immigration policy:

The fundamental problem is that the Administration is trying to implement laws that Congress hasn’t passed. The President himself has admitted that he doesn’t have the constitutional authority to implement the DREAM Act: “The idea of doing things on my own is very tempting, I promise you, not just on immigration reform. But that’s not how our system works.” 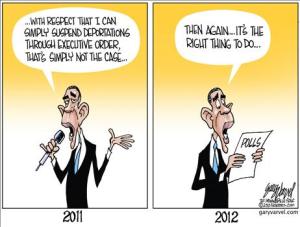 One of the reasons our Founding Fathers separated the powers among the three branches of government is to ensure that laws have the majority support of the people’s representatives, who take due consideration of all the competing interests. By circumventing the legislative branch and its deliberative processes, President Obama made a decision that subverts the rule of law and makes enforcement a road riddled with pot holes.

NOTE: What is the point of having Laws, if money or power or Executive Order can supersede the LAW? What is the point of establishing borders if they will not be respected and maintained particularly by the arm of the government established for the sole purpose of “Homeland Security?” The pathetic thing about this administration and those who support it is their nullification of the historical greatness of the American people. We can handle anything, if only we know the TRUTH, but this administration doesn’t think we can handle the truth. Neither does he think we are able to take care of ourselves AND the poor and needy among us. He is very wrong … on both counts!

BTW … there is still nothing preventing the “RICH” from “donating” MORE of their income than the IRS requires of them if they choose … and that’s true for any of us. I’ll stick to “charity” in my own way, thanks!

2 thoughts on “Shocker of the Week: Illegal Immigrants Exploit Obama Amnesty Program to Stay in U.S.”