The crowds this time around are not quite as enthusiastic, or quite as numerous! Worship for Obamessiah is dwindling.

As I’m sure you all know by now, Obama has suggested that for the next few months, nobody should send anyone a wedding, anniversary, birthday or bar mitzvah gift, and should, instead, send the money to him.

I must confess that my first reaction was one of elation. It seemed a great way to get out of having to buy all those pricey gifts. I could simply send a card that announced that in lieu of a waffle iron or a bed spread, I was sending a generous contribution to Obama’s re-election campaign. But it immediately occurred to me that my friends and relatives would take it as a sure sign that either I was even cheaper than they had previously suspected; or, worse yet, that I had taken total leave of my senses, and the next step was to have me committed to a loony bin.

Frankly, I am amazed that, according to the polls, Obama is tied with or running slightly ahead of Romney. It makes no sense. When you realize how great the nation’s debt has grown over the past three years, how static the unemployment rate has remained and how much respect America has lost world-wide, Obama’s approval numbers should be single digit, consisting solely of his Chicago cronies, college students and aging Bolsheviks.

In the old days, liberals believed everything they read in Pravda and the Daily Worker. Today, they believe everything they read in the New York Times or see on ABC, NBC and CBS. Once I realized that, it occurred to me that those on the Left are so hopelessly addicted to lies that it’s a shame that interventions are limited to those whose demons are alcohol, drugs or gambling. In a pinch, however, excellent results have often resulted when the innocent victims of left-wing professors and network news anchors have been treated with the business end of a baseball bat.

Speaking of liberals, something that sets them apart from rational human beings is their devotion to abortions. It was bad enough when they danced in the streets after the Roe v. Wade decision was announced. But all these years later, after science has provided them with any number of pills and devices with which to avoid pregnancy, and schools have spent more time teaching kids how to prevent bananas from getting pregnant than how to spell “Mississippi,” you would think that the issue would be about as relevant as whether we should revolt against British rule.

But if you listen to the way that liberal women carry on, you would think that such things as a nuclear Iran, a 16 trillion dollar national debt and ObamaCare, all take a backseat to abortions on demand for teenagers. The logical conclusion is that liberals are simply too dumb to have sex and chew gum at the same time.

Speaking of ObamaCare, I admit I was one of those people who was blindsided by Chief Justice Roberts siding with the four crazies on the Court. Even when earlier in the week he voted the wrong way on Arizona’s immigration law, I gave him the benefit of the doubt. I thought he might have been engaged in the sort of horse-trading that frequently used to go on in Congress, when a Republican would agree to vote the wrong way on one issue in order to get a Democrat to vote the right way on another. I know that’s not how it’s supposed to work on the Supreme Court, but people are people even if they get to wear their bathrobes to work. 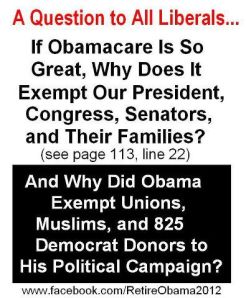 Although I prefer to concentrate on the bright side — namely that Obama is now forced to campaign with ObamaCare connected to him like a tin can or like a strip of toilet paper trailing from his shoe — it does raise serious questions about John Roberts. Why has he sold out his conservative principles? Why has he, the appointee of a Republican president, gone so far astray, reminding many of us of those earlier scoundrels, Earl Warren and Harry Blackmun?

I have come up with two scenarios. One, perhaps Roberts has passed out and bonked his head on a dock more times than we’ve been told about.

Or, two, he’s been seduced by those three notoriously saucy vixens, Kagan, Ginsburg and Sotomayor.

In any case, I’m taking a page out of Obama’s playbook. I blame George Bush! 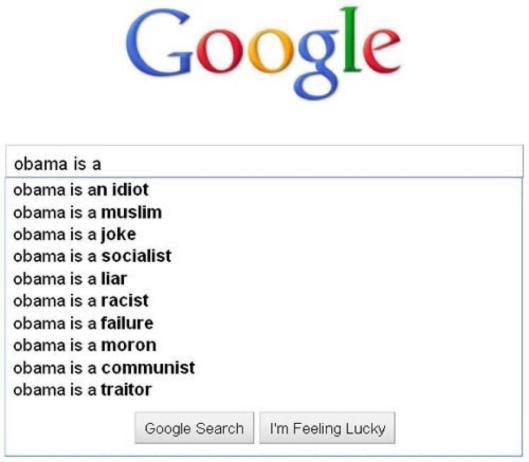 Obama Quote: “A Step In The Right Direction.”

Question: What does Obama Mean by this?

My Answer: My interpretation is a step in the right direction in “Fundamentally Transforming America.”

What is your interpretation?