Scalia: Guns May be Regulated

Justice Antonin Scalia, one of the Supreme Court’s most vocal and conservative justices, said on Sunday that the Second Amendment leaves room for U.S. legislatures to regulate guns, including menacing hand-held weapons.

“It will have to be decided in future cases,” Scalia said on Fox News Sunday. But there were legal precedents from the days of the Founding Fathers that banned frightening weapons which a constitutional originalist like himself must recognize. There were also “locational limitations” on where weapons could be carried, the justice noted.

When asked if that kind of precedent would apply to assault weapons, or 100-round ammunition magazines like those used in the recent Colorado movie theater massacre, Scalia declined to speculate. “We’ll see,” he said. ‘”It will have to be decided.”

As an originalist scholar, Scalia looks to the text of the Constitution—which confirms the right to bear arms—but also the context of 18th-century history. “They had some limitations on the nature of arms that could be borne,” he told host Chris Wallace.

In a wide-ranging interview, Scalia also stuck by his criticism of Chief Justice John Roberts and the majority opinion in the ruling that upheld the Affordable Care Act this summer. “You don’t interpret a penalty to be a pig. It can’t be a pig,” said Scalia, of the court’s decision to call the penalty for not obtaining health insurance a tax. “There is no way to regard this penalty as a tax.”

Scalia, a septuagenarian, said he had given no thought to retiring. “My wife doesn’t want me hanging around the house,” he joked. But he did say he would try to time his retirement from the court so that a justice of similar conservative sentiments would take his place, presumably as the appointee of a Republican president. “Of course I would not like to be replaced by somebody who sets out immediately to undo” what he has spent decades trying to achieve, the justice said. 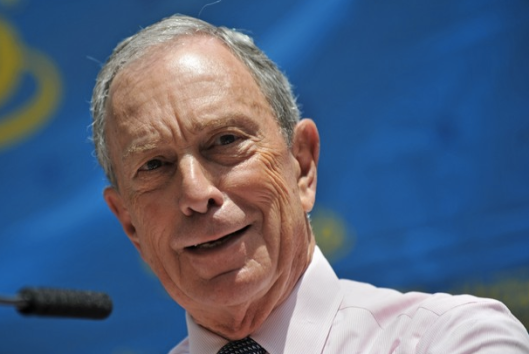 Mayor Bloomberg, also known as “Nanny Bloomberg” thanks to his many regulations for New York City, has gone a step beyond banning sugary sodas and trans fats, according to the New York Post. Now, it seems he is also trying to regulate breast milk.

According to the Post, Bloomberg is actually pushing hospitals to keep their baby formulas “behind locked doors” so that new mothers will be more likely to breastfeed. Participating hospitals will begin on September 3d.

The nanny state is going after moms.
[…]
Under the city Health Department’s voluntary Latch On NYC initiative, 27 of the city’s 40 hospitals have also agreed to give up swag bags sporting formula-company logos, toss out formula-branded tchotchkes like lanyards and mugs, and document a medical reason for every bottle that a newborn receives.
While breast-feeding activists applaud the move, bottle-feeding moms are bristling at the latest lactation lecture.
“If they put pressure on me, I would get annoyed,” said Lynn Sidnam, a Staten Island mother of two formula-fed girls, ages 4 months and 9 years. “It’s for me to choose.”

Under Latch On NYC, new mothers who want formula won’t be denied it, but hospitals will keep infant formula in out-of-the-way secure storerooms or in locked boxes like those used to dispense and track medications.

With each bottle a mother requests and receives, she’ll also get a talking-to. Staffers will explain why she should offer the breast instead.

“It’s the patient’s choice,” said Allison Walsh, of Beth Israel Medical Center. “But it’s our job to educate them on the best option.”

Read more about the “Latch On NYC” initiative by clicking here.

Like Bloomberg’s other regulations, the breast milk policy bears a resemblance to Cass Sunstein’s “nudge” theory. The Administrator of the Office of Information and Regulatory Affairs (also known as the “Regulatory Czar“), Sunstein has long-advocated “nudging” Americans in the direction they really ought to go, by defining their choices and making the less desirable ones more inconvenient. No one is forcing you to do anything…just helping to guide your decisions.

But for many, regulating soda and regulating breast milk are two different matters entirely. The latter, obviously, feels much more invasive. > > > READ MORE

U.S. Air Force Staff Sgt. Warren Williamson Jr., a medic with the 18th Medical Operations Squadron, sits in his “office”, an ambulance, at Kadena Air Base, Japan, July 24, 2012. Williamson was recently awarded the Non-Commissioned Officers Association Vanguard Award, for his heroic actions that saved the lives of others during a deployment to Afghanistan last year.

“We were used to getting hit,” said Staff Sgt. Warren Williamson Jr., a medic with the 18th Medical Operations Squadron. “But that day…that day was different.”

Of the 300-plus combat missions he was a part of while deployed last year, Williamson recalls a day he will never forget, a day he could have lost everything, but gained so much more.

For his second 365-plus day deployment to Afghanistan, he was sent to a forward operating base located in the Laghman Province of Afghanistan to be the sole medic for a group of soldiers from the 1st Battalion, 181st Infantry Regiment, Bravo Company.

“I was the primary doctor, the sole provider there,” said the Chesapeake, Va., native. “Dismounted elements wouldn’t leave the truck without the doc, without me. I escorted all dismounted missions away from the convoy.”

“That morning we headed out on a mounted combat patrol to a green district, meaning there wasn’t a whole lot of Taliban activity,” he explained.

“The mission was for our team to provide security for a few civil engineer officers to check out a courthouse in a local district that had been rocketed by the Taliban,” Williamson continued. “At the same time, I was to meet with the district hospital medical provider there and discuss some medical issues.”

The courthouse mission lasted roughly two hours. They parked the convoy inside the district and dismounted. The engineers walked the perimeter of the district, and measured it, ending the fairly smooth mission around 10 a.m.

“We were getting ready to mount back up and continue on for my mission to meet the doctor,” he said. “But first we had to maneuver our trucks so that they weren’t blocking traffic. So although some soldiers were in the trucks, most of us were still on foot, guiding the trucks and pulling security.”

“As we were prepping to move the trucks, we were caught off guard,” he continued. “Before we knew what was happening, an Afghan had gotten on his motorcycle, road right through our formation, and detonated a vehicle-borne IED, instantly killing himself, injuring my guys and killing a bunch of his.”

More than 10 people were killed that day.

“We were knocked unconscious. I’m not sure how many of us were on the ground, to be honest, but when I looked up, it was just…chaos. I can’t describe it any other way.”

He and his team were no strangers to getting attacked. But, Williamson said he knew this time was different. It was the worst they’ve experienced in the six months they had already been deployed.

“When I came to, the dust hadn’t even settled yet and all I could hear were screams and a group of my guys dragging one of the soldiers closer to me screaming ‘doc, doc!’,” explained the medic that spent two years training with Air Force pararescuemen. “As they got closer I got to my feet and helped get that soldier to the safest place I could to treat his wounds, because at that point we had started taking small arms fire as well.”

Behind a small dirt wall, shielded from incoming fire, Williamson did everything he could to keep his soldiers alive.

“I used gauze and bandages, gave him drugs and fluid, and right after I applied a tourniquet to his arm, that’s when,” he paused, this time with a deep breath. “I heard them calling for me again.”

“So I put on the tourniquet and ran over to my first sergeant, who I thought was dead,” he remembered. “I didn’t see him breathing, I didn’t see him yelling or screaming. I just saw huge holes in him. He was laid out.”

Williamson knew he had to take action, and quick. But as they started taking fire once again, Williamson did the only the only thing he could and hurled his body over his first sergeant, knowing he had to protect him.

“I didn’t know where the attack was coming from and it was just my first reaction,” Williamson humbly explained. “It’s my job to keep those guys healthy.”

“But we found a way to move my first sergeant to a safe place and I got to work, trying to save this man’s life,” he continued. “I used everything I had –QuikClot, tourniquets, bandages, drugs, and every last drop of the fluids I had. All I could think was ‘stop the bleeding, save this person’s life’.”

“Gosh, it’s been just over a year ago, now, and I’ve only ever told that story once,” he said.

The incident lasted about 10 minutes. Williamson said when he looks back on this event it feels like he’s watching an “old slow-motion movie reel,” but at the time it, it seemed like mere seconds.

Thanks to quick thinking, dedication and selflessness, not only did every soldier survive that day, they survived every mission, and returned home to their families. > > > READ MORE

Has Baghdad Bob Moved to Tehran?

American reporters gave Mohammed Saeed al-Sahhaf, the Iraqi information minister under Saddam Hussein during the American-led invasion of 2003, the disdainful name “Baghdad Bob” (and the British called him “Comical Ali”). He spouted wildly inaccurate propaganda during his daily press briefings, praising the Iraqi troops and telling fabulous tales of how they had crushed the foreign invaders, even as those invaders could be seen on the screen moving in on him.

Well, Iranian brigadier generals seem to be emulating Bob. Two recent quotes (with some editing of the English): 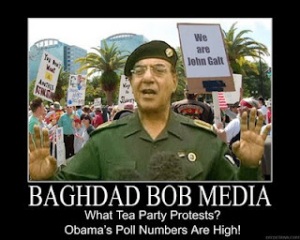 Brigadier General Hossein Salami, lieutenant commander of the Islamic Revolutionary Guards Corps: “The IRGC is never intimidated by the hugeness of the aircraft carriers and the roaring of missiles of U.S. and trans-regional enemies, and their equipment is nothing more than rusty iron in its eyes.” Brigadier General Ahmad Vahidi, the minister of defense, in a telephone conversation with his Syrian counterpart just as he took over from his assassinated predecessor, paraphrased by the Islamic Republic News Agency: “Iran is confident that Syria’s powerful defense system will made the United States, its regional allies, and Israel back down from their plan of achieving their goals in the region. He said the Zionist regime and terrorists can not affect Syrian army’s strong will and can not build a stronghold for Israel through psychological operations in Syria.”

Comments: (1) One hopes that these remarks are not sincerely believed for, as Geoffrey Blainey convincingly argues in The Causes of War, the leading cause of fighting is over-optimism: “Wars usually begin when two nations disagree on their relative strength, and wars usually cease when the fighting nations agree on their relative strength.” (2) Even if not sincerely believed, such claims take on a life of their own and often lead to regrettable consequences.