The famed statue of Joe Paterno was taken down from outside the Penn State football stadium Sunday, eliminating a key piece of the iconography surrounding the once-sainted football coach accused of burying child sex abuse allegations against a retired assistant.

Workers lifted the 7-foot-tall statue off its base and used a forklift to move it into Beaver Stadium as the 100 to 150 students watching chanted, “We are Penn State.”

The university announced earlier Sunday that it was taking down the monument in the wake of an investigative report that found the late coach and three other top Penn State administrators concealed sex abuse claims against retired assistant coach Jerry Sandusky. 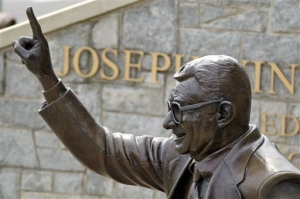 The statue, weighing more than 900 pounds, was built in 2001 in honor of Paterno’s record-setting 324th Division 1 coaching victory and his “contributions to the university.”

A spokeswoman for the Paterno family didn’t immediately return phone and email messages.

Construction vehicles and police arrived shortly after dawn Sunday, barricading the street and sidewalks near the statue, erecting a chain-link fence then concealing the statue with a blue tarp.

Penn State President Rod Erickson said he decided to have the statue removed and put into storage because it “has become a source of division and an obstacle to healing.”

“I believe that, were it to remain, the statue will be a recurring wound to the multitude of individuals across the nation and beyond who have been the victims of child abuse,” Erickson said in a statement released at 7 a.m. Sunday.

The Freeh report made it clear that Paterno, who was widely respected for trying to teach a code of behavior to his student athletes, failed to live up to that code when it counted the most — the protection of children. In the end, he was more concerned about the reputation of his football program than in the safety of kids.

NOTE: This is in many ways reflective of the standard of behavior we have allowed in our nation. At one point in our history, we expected integrity in those who held leadership positions. No longer is that true … or is it? Perhaps, we just took our eye off the ball for a while. The truly pathetic part of this whole scandal is how it makes whatever good was accomplished by Paterno over the course of his lifetime at Penn State null and void.

I pray healing and restoration for the victims, and I pray for peace for the families involved – all of them!

Did you know James Holmes gave money to Barack Obama?

It’s true. And I knew this yesterday morning.

Why didn’t I write this up for The American Spectator to publish as a blog post — on the spot?

In the first flush of the carnage in Colorado yesterday morning, when the shooter’s name had made it to the airwaves but not much else about him, everybody with a computer and a phone was scouring all manner of Internet sites to find out about James Holmes.

In my case I found that James Holmes was on the Federal Election Commission rolls as an Obama contributor. The problem? I had absolutely no idea whether this was the same James Holmes who was the Colorado movie murderer — and with good reason. “James Holmes” or “Jim Holmes” are not exactly odd names in America. Indeed, the FEC had dozens of “James Holmes” on its contributor lists — as did all manner of other sites have the same two names. In fact, there were several James Holmes or Jim Holmes on social sites listed as living in or around Aurora, Colorado or what we had learned was his family home — San Diego, California. In the latter case, there was a Jim Holmes who professed himself to be a “lefty.” With enough persistence one could learn their ages and place of residence. That Jim Holmes in the San Diego area was long over 24.

So I never wrote him up. James Holmes and his connection to President Obama never made it to The American Spectator. Good thing — because if I had done that I would have looked like an idiot, and deservedly so.
Obviously standards are a little looser over at ABC News. Where yesterday ABC News anchor and longtime Democratic Party operative George Stephanopoulos called on correspondent Brian Ross to tell America breathlessly that he had found a page for “Jim Holmes” with the Colorado Tea Party.

So today they have egg on their face.

Here’s Brent Bozell of the Media Research Center on the episode at ABC:

Bozell: ABC’s Disgraceful Rush to Judgment on the Tea Party

This morning, in the aftermath of the unspeakable Colorado massacre that claimed at least 12 innocent American lives and injured dozens more, ABC “news” investigative reporter Brian Ross appeared on ABC’s Good Morning America and made the outrageous, irresponsible, and completely unfounded claim that the alleged gunman, 24-year-old Jim Holmes, is a member of the Tea Party. Apparently Ross has learned absolutely nothing from the media’s disgraceful rush to judgment and dissemination of misinformation following the shooting of Rep. Gabrielle Giffords in January 2011.

That’s twice now that the “news” media have falsely implicated the Tea Party in murder.

In his brazen attempt to smear the Tea Party, Ross speculated on national television to millions of viewers that Holmes was a member of the Tea Party based on a social media webpage. When it became apparent that this accusation was false, ABC offered an apology, but they chose to release it online where only a fraction of Good Morning America’s misinformed viewers would see it. In addition, Ross had the gall to appear on ABC News to correct himself without offering an on-air apology.

Ross slandered every American even loosely associated with the Tea Party, and he owes them an apology. He must also apologize to Good Morning America’s audience, the James Holmes he falsely implicated of mass murder, and, most of all, to each and every person in Colorado directly or indirectly affected by this horrific tragedy.

In a moment that demanded clarity of thought and purpose, Ross rushed to slander those with whom he does not agree politically, exposing the depths and darkness of his political prejudices. Shame on Brian Ross, and shame on ABC News for not yet demanding he look directly into the camera and beg forgiveness for politicizing this terrible event. Ross’ meek Twitter apology is a cynically insincere slap in the face to us all.

What was going on in the heads of this liberal media outlet when they ran on-air with a story linking the Tea Party to the Colorado shooter — a story they had not found to be fact.

Safe to say, it was not the same thing that went through my head when I found out that James Holmes was a contributor to Barack Obama.