Like a child who edges the line to see how many rules he can break, President Obama is testing America’s patience with a pattern of unconstitutional behavior that rivals any other president’s record, trading out America’s founding principles for top-down policies designed to centralize control in the federal government. No wonder Americans are fed up and eager to take back what’s theirs by staging a hostile takeover of Washington. 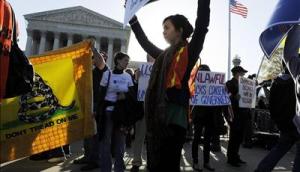 Supporters of the healthcare law walk past opponents from the Tea Party Patriots group on the sidewalk outside the Supreme Court.

At its outset, the political elite ignored the Tea Party, casting it off as a partisan flash in the pan as it grew in strength in the early part of 2009. Since then, the Tea Party has transformed from a street protest movement into a political machine with an impressive slew of legislative and electoral victories under its belt. After the midterm elections in 2010, the establishment has had to recognize that the Tea Party is indeed a force to be reckoned with.

What makes the Tea Party unique as a vehicle for change is that there isn’t any grand plan. It’s millions of people in disparate places—each individual in possession of a unique perspective; particular goals, wants, and needs; and a personal knowledge of their community and circumstances—coming together in voluntary cooperation to create something far greater and more valuable than any one individual could achieve alone. The movement is an embodiment of its principles of decentralization.

The Tea Party has been able to organize in this way because of the liberating power of social media and the decentralized, open-ended online discovery process. Social media outlets like Facebook and Twitter allow individuals to engage and share with others they may never have been able to meet otherwise. In this way, grassroots organizing allows the Tea Party to mobilize itself by gaining information quicker and sparking its message across many venues.

The Tea Party’s ability to organize has helped it take over government in two effective ways—impacting legislation and winning elections. The Tea Party’s first major victory came when it defeated the initial version of TARP legislation. Grassroots organizers, enabled by the low cost of communication and ignited by technology to coordinate, began calling their representatives in Washington and effectively had it ousted. The Tea Party used those same tactics with the introduction of Obamacare—enacting non-stop protests, attending town-hall meetings, and speaking with their congressmen.

The movement has also found victory at the ballot box, where it has challenged unprincipled Republicans in primaries and sent dozens of strong conservative to Washington in general elections. In doing so, the movement has challenged the top-down method of campaigning. The Tea Party was growing the pie, adding new potential voters to its ranks, looking in districts that hadn’t been in play before, and effectively organizing voters. It focused on social, technological, and personal networks. As it turns out, the grassroots protests were not only a good recruitment mechanism for building boots on the ground, they also created a powerful market signal to potential candidates with both the principles and the practical skills needed to win public office.

The momentum built in 2010 is continuing in 2012. Most recently, the Tea Party helped Wisconsin Gov. Scott Walker win the union-backed recall. In Indiana’s Republican Senate primary, it helped conservative Richard Mourdock defeat moderate incumbent Dick Lugar. In Utah, it forced Sen. Orrin Hatch to reevaluate his commitment to conservative principles. It seems that everywhere the Tea Party is, the movement is enacting change. > > > READ MORE