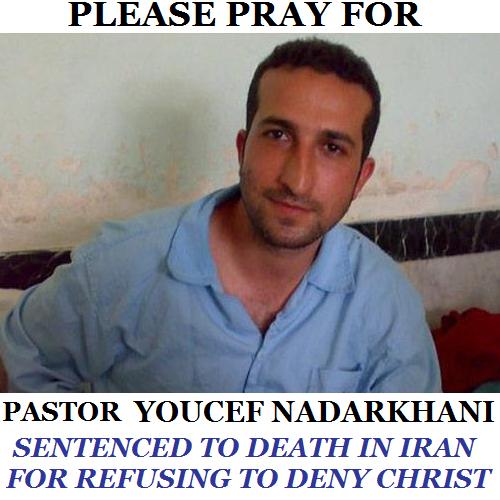 Presenting his interim report to the committee, Mr. Shaheed expressed his concern over Iran’s repeated violations of human rights, and he specifically cited the country’s judicial system for its complicity. He cited the Judiciary for practices of torture, cruel or degrading treatment of detainees, and the impositions of the death penalty without necessary safeguards. Furthermore, Mr. Shaheed identified that the Iranian Judiciary denied alleged criminals access to legal counsel and medical treatment, and he highlighted Iran’s “widespread use of secret and public executions.” Mr. Shaheed acknowledged that Iran carries out “[s]ecret group executions inside prisons, which regularly occur in alarmingly high numbers, [and] are often carried out without the knowledge and presence of family and lawyers.” PLEASE READ MORE

Pastor Youcef Nadarkhani’s case has gone before Iran’s supreme leader, Ayatollah Khamenei, and Nadarkhani’s lawyer believes a decision could come in the next few weeks.

The pastor, who was imprisoned in 2009 for refusing to require his son to study the Quran, received international attention after he was charged with apostasy. Eighty-nine members of Congress, on both sides of the aisle, have sent letters calling on Secretary of State Hillary Clinton to insist the U.N. step in. And the American Center for Law and Justice (ACLJ) has sent Clinton a petition signed by 178,000 people calling for the Iranian government to release the pastor.

Todd Nettleton with Voice of the Martyrs said that a fulfillment of an apostasy sentence would be rare. “In the last 20 years, no Christian has been executed by the state for apostasy,” Nettleton said according to Mission Network News. “So, it’s rare that we have a verdict and that the sentence is actually carried out.”

If you have not already done so, TAKE ACTION please …

Contact the Representative
of Iran to the United Nations