THE PLACE: Manhattan, the Federal Hall, just off WALL ST, and around the corner from Ground Zero

THE EVENT: the Inauguration of the First President of the United States of America, GEORGE WASHINGTON

The very first act of the newly sworn President was to lead the entire new Congress from the Federal Hall around the corner to St Paul’s Chapel where he dedicated both himself and the new nation to God in prayer. Thank none of the Founder’s might have been called Evangelical Christians, they each respected the personal choice of one’s private spiritual beliefs. They made no attempt to define “God,” but recognized the necessity of a Sovereign Hand, the Hand of Providence.

George Washington, an adherent of “Nature’s God”, and indeed, questionably “Christian” by today’s definition, said in his first inaugural address:

“Such being the impressions under which I have, in obedience to the public summons, repaired to the present station, it would be peculiarly improper to omit in this first official act my fervent supplications to that Almighty Being who rules over the universe, who presides in the councils of nations, and whose providential aids can supply every human defect, that His benediction may consecrate to the liberties and happiness of the people of the United States a Government instituted by themselves for these essential purposes, and may enable every instrument employed in its administration to execute with success the functions allotted to his charge.”

And Washington spoke not just for himself, but for the new American nation:

In tendering this homage to the Great Author of every public and private good, I assure myself that it expresses your sentiments not less than my own, nor those of my fellow-citizens at large less than either.

HE continues in his speech to credit the Almighty with a peaceful agreement among men how to govern themselves and each other … the Constitution:

“No people can be bound to acknowledge and adore the Invisible Hand which conducts the affairs of men more than those of the United States. Every step by which they have advanced to the character of an independent nation seems to have been distinguished by some token of providential agency; and in the important revolution just accomplished in the system of their united government the tranquil deliberations and voluntary consent of so many distinct communities from which the event has resulted can not be compared with the means by which most governments have been established without some return of pious gratitude, along with an humble anticipation of the future blessings which the past seem to presage. These reflections, arising out of the present crisis, have forced themselves too strongly on my mind to be suppressed. You will join with me, I trust, in thinking that there are none under the influence of which the proceedings of a new and free government can more auspiciously commence.”

Everyone who was alive remembers that beautiful early autumn morning. Blue skies. Bright, warm sunshine. Until out of the blue a plane flies directly into … the Heart of America’s success. The bubble burst. The “untouchability” of the Great American Experiment Achieved, was pierced, shredded, and dismembered by a relative unknown. It wasn’t a competing Giant that attacked, but a fearless enemy. To this day, more than a decade later, our government refuses to define our “enemy,” which, of course means they cannot be defeated.

Firefighters and rescue workers took refuge at St Paul’s Chapel, as did those hunting their loved ones. Saved miraculously by a fallen tree, the Chapel – the very same one President Washington and his Congress prayed in, became an oasis of hope, comfort, and rest. 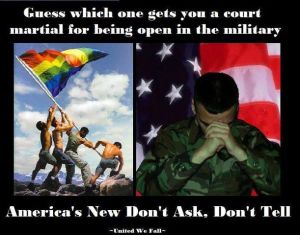 But now, in 2013, our current President has declared Christianity illegal. This Is What Intolerance Smells Like… AND Pentagon Hires Anti-Conservative Activist Who Branded Fundamentalists as ‘Christian Monsters’

Since that mind-numbing tragedy, any number of related incidents have occurred both here and abroad, and still the “political machine” insists we are not permitted to label “ISLAM” our enemy – even though they declare loudly their intent to destroy America & Israel.

Has anyone considered the possibility of what President Washington stated, below, has come back around to bite US in the hindquartrs? Just a thought …

“I dwell on this prospect with every satisfaction which an ardent love for my country can inspire, since there is no truth more thoroughly established than that there exists in the economy and course of nature an indissoluble union between virtue and happiness; between duty and advantage; between the genuine maxims of an honest and magnanimous policy and the solid rewards of public prosperity and felicity; since we ought to be no less persuaded that the propitious smiles of Heaven can never be expected on a nation that disregards the eternal rules of order and right which Heaven itself has ordained; and since the preservation of the sacred fire of liberty and the destiny of the republican model of government are justly considered, perhaps, as deeply, as finally, staked on the experiment entrusted to the hands of the American people.” (emphasis mine – BB) George Washington, First Inaugural Address of George Washington

America was born of God. She grew in God for many years, perhaps until her adolescence. Now, as a rebellious teen, she defies God’s authority and ways. She believes herself, like many 16 year olds, much more knowledgeable than those with more life experience. The American people, though possessed still of generous and compassionate hearts, grow lazy … weary in well-doing. So, instead of each of us exercising our compassion and generosity, we are told to GIVE to the GOVERNMENT and the GOVERNMENT will take care of the poor … SHOW ME?

OBAMACARE? Oh right! … Not happening, folks! NOT helping anyone – HURTING EVERYONE!!!!

What can we do then?

“Posttraumatic stress disorder (PTSD) is an anxiety disorder that can occur after you have been through a traumatic event. A traumatic event is something horrible and scary that you see or that happens to you. During this type of event, you think that your life or others’ lives are in danger. You may feel afraid or feel that you have no control over what is happening.

“Anyone who has gone through a life-threatening event can develop PTSD. These events can include:

With the way war is waged at this time, everyone who serves in the military should periodically be screened for signs of PTSD. Our brains, our emotions are simply not constructed to process all that is seen, heard, smelled, felt in battle or traumatic disaster. It leaves scars. Some vanish in time, but some we can only adjust ourselves to – they are a permanent part of us now.

“After a traumatic experience, it’s normal to feel frightened, sad, anxious, and disconnected. Usually, as time passes, the upset fades, and you start to enjoy life again. But sometimes the trauma you experienced is so overwhelming that you find that you can’t move on. You feel stuck with painful memories that don’t fade and a constant sense of danger.
“If you went through a traumatic experience and are having trouble getting back to your regular life, reconnecting to others, and feeling safe again, you may be suffering from post-traumatic stress disorder (PTSD). When you have PTSD, it can seem like you’ll never get over what happened or feel normal again. But help is available—and you are not alone. If you are willing to seek treatment, reach out to others for support, and work on developing new coping skills, you will be able to overcome the symptoms of PTSD and move on with your life.” Continue reading

“American Veterans with Brain Injuries (AVBI) was organized in 2004 as a grassroots effort whose mission is to offer support to the families of American Servicemembers and Veterans who have suffered brain injuries. AVBI.org went live on the Internet in 2006 to provide a web based peer support network and information resource. In January 2009, in order to expand support services and programs specifically designed for these veterans and their family members, American Veterans with Brain Injuries, Inc. was incorporated as a Not for Profit organization.” CONTINUE READING