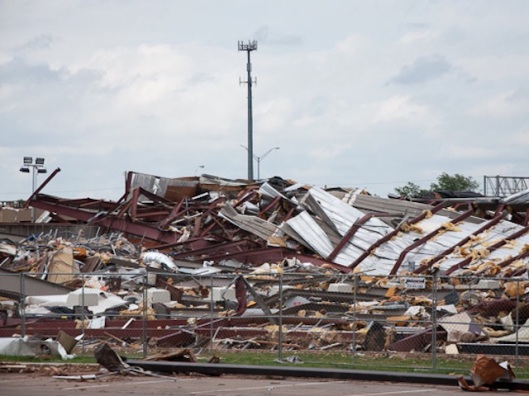 Obama calls on Americans to “Step Up”

On May 26, President Obama stood before the cameras in what was once the town of Moore, Oklahoma and gave a heartfelt speech. He proudly told the media that it wasn’t just the government responding to the devastation caused by a massive tornado, but gave high praise to churches and community groups for their support. President Obama challenged all Americans to “step up…Go online, donate to the American Red Cross…”

The president went on to tell the story he heard about a Bible found in the wreckage that was open to Isaiah 32:2, “The verse,” he said, “read, ‘A man will be as a hiding place from the wind, and a cover from the tempest’…. and it’s a reminder, as Scripture often is, that God has a plan, and it’s important, though, that we also recognize we’re an instrument of his will.” Continuing, Obama said, “And we need to know that as fellow Americans, we’re going to be there as shelter from the storm for the people of Moore who have been impacted.”

Moore and Oklahoma City need blankets and toys to replace what the storm took from them, and yes, like the President said, the citizens need water, food and shelter. This is especially true after a second tornado struck Oklahoma City just eleven days after the suburb of Moore was leveled by an EF-5 twister on May 20.

Reaching out and helping those in need is a Biblical command that is all too easy to ignore in the hope that someone else is doing something to help. However the visceral image 1 John 3:17-18 paints for the believer is hard to avoid: “But if anyone has the world’s goods, and sees his brother in need, yet closes his heart against him, how does God’s love abide in him?”

While President Obama did a great job of telling the country about Moore’s need for the world’s goods, he failed to mention their need for God’s love. The Oklahoma City area needs to see the Church – not just churches – reaching out to love them. The Church, which is made up of believers like you, needs to “step up” to the challenge; not just because the Commander in Chief told it to, but because God calls the believer to help those in need. There are countless Christian non-profits, such as Samaritan’s Purse, and The Salvation Army, where you can donate funds to aid the needy in Moore. What a testimony it would be if the Church gave so much that government, or secular non-profit funds were unnecessary. READ MORE HERE