BLOGGER’S NOTE: All too sadly, a significant segment of the American people cling vehemently to their supposed “Hope & Change.” Some are uncertain enough to be reached by facts, but still many, in spite of the overwhelming evidence to the contrary, believe President Obama has accomplished, is accomplishing, or will accomplish something worthwhile if allowed to “finish what he started.” If I have the opportunity to ask what that might be, I have yet to receive an answer of substance. Most, I fear, simply do not get it. Jobs are not created by raising taxes on the job creators or by Presidential picks for bailouts(with tax dollars.) Healthcare cannot be “fairly” mandated upon those who cannot afford it in the first place – it is NOT a human right guaranteed by God or the Constitution (Emergency rooms treat ANYONE.) To say (and believe) “You didn’t build that!” is to denounce hard work, creativity, and perseverance and replace them with a disrespect for personal property, personal achievement, and personal dreams! I hesitate to imply stupidity, but instead assume it is naiveté. If any of these individuals stumble upon this article, please identify the redeeming accomplishment(s) from the list below, or add your own. This is asked out of genuine curiosity – not mockery!

Socialism Is as Socialism Does 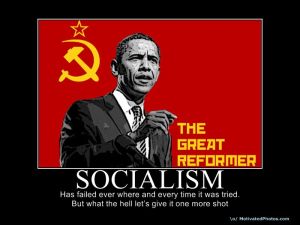 Barack Obama’s mentor as a young man was communist party member Frank Marshall Davis. As a community organizer he was a follower and promoter of the communist fellow-traveler Saul Alinsky’s methods and goals. As a professional in Hyde Park he associated with socialist radicals such as Bill Ayers. As an up-and-coming Chicago Politician he attended the church of Reverend Jeremiah Wright, an outspoken proponent of the socialist Black Liberation Theology. As president he appointed communist Van Jones to be one of his many Czars. Mr. Obama says he is not a socialist. However, simple logic tells us if it looks like a duck and walks like a duck, and quacks like a duck you can be relatively certain it’s a duck.

Mr. Obama has told us that he seeks to be a transformational president like his idol FDR. He was bold enough to tell us just days before the election in 2008 that he would fundamentally transform America. In just one term he has accomplished much along the way to changing us from what we have always been into what the Progressives have always wanted us to be.

How has Barak Obama transformed us? Into what is he transforming us? A look at his impressive list of firsts as president of these United States points in the direction he is herding us (lists of Mr. Obama’s firsts are found numerous places):

Mr. Obama is leading us from being the first among nations to being just another vote in the United Nations. Now there’s a level playing field for you. And now it’s time for another election, some say our most important, some say perhaps our last.

In many ways this election cycle is refreshing. For generations the Progressives have pretended to be something they are not to win elections. They have pretended to be dedicated to the American dream of personal liberty, economic freedom and the belief that America was different from other nations, that as the world’s first and most enduring modern experiment in a republic based on limited government we were exceptional. Although the policies of the Progressives have always been at odds with this assumed identity at least every election cycle they would tip their hat to the America of our fathers and portray themselves as a Thomas Jefferson or an Andrew Jackson.