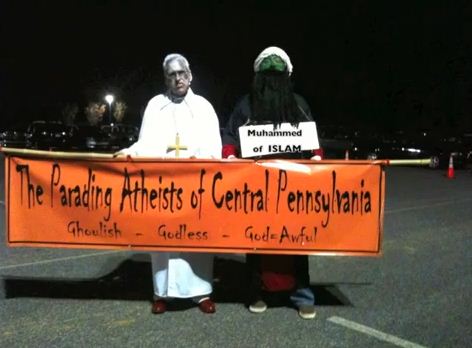 There is a surprising story out of Mechanicsburg, Pennsylvania that seems the perfect storm of religious tensions. You begin with Ernie Perce, an atheist who marched as a zombie Mohammad in the Mechanicsburg Halloween parade. Then you add Talaag Elbayomy, a Muslim who stepped off a curb and reportedly attacked Perce for insulting the Prophet. Then you have a judge (Judge Mark Martin) who threw out the criminal charges against Elbayomy and ridiculed the victim, Perce. The Judge identifies himself as a Muslim and says that Perce conduct is not what the First Amendment is supposed to protect.

Perce is the American Atheists’ Pennsylvania State Director and marched with other atheists, including one dressed as a creepy Pope. Here is the tape of the incident:

Perce says that Elbayomy grabbed him and tried to take his sign. Elbayomy was at the parade with his wife and children and said that he felt he had to act in the face of the insult. The officer at the scene, Sgt. Brian Curtis, correctly concluded that Perce was engaged in a lawful, first amendment activity. He therefore charged Elbayomy. While it looks like an assault, he was only charged with harassment. 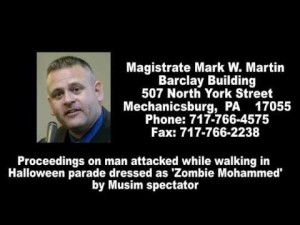 The case, however, then went to District Judge Mark Martin who not only threw out the charge of harassment but ridiculed Perce as a “doofus.” He also proceeds to not only give an account of his own Muslim faith (and say that he was offended personally by Perce’s action) but suggests that Elbayomy was just protecting his “culture.” The judge not only points to his own Koran but his time in Muslim countries as relevant to his deliberations. Putting aside the problem of ruling in a case where you admit you have strong personal feelings, the lecture given on the first amendment is perfectly grotesque from a civil liberties perspective.

Here is part of the hearing transcript:

“Well, having had the benefit of having spent over two-and-a-half years in predominantly Muslim countries, I think I know a little bit about the faith of Islam. In fact, I have a copy of the Quran here, and I would challenge you, Sir, to show me where it says in the Quran that Muhammad arose and walked among the dead. I think you misinterpreted a couple of things. So before you start mocking somebody else’s religion, you might want to find out a little more about it. It kind of makes you look like a doofus…

“I don’t think you’re aware, Sir, there’s a big difference between how Americans practice Christianity — I understand you’re an atheist — but see Islam is not just a religion. It’s their culture, their culture, their very essence, their very being. They pray five times a day toward Mecca. To be a good Muslim before you die, you have to make a pilgrimage to Mecca, unless you’re otherwise told you cannot because you’re too ill, too elderly, whatever, but you must make the attempt. Their greeting is ‘Salam alaikum, wa-laikum as-Salam,’ uh, ‘May God be with you.’

“Whenever it is very common, their language, when they’re speaking to each other, it’s very common for them to say, uh, Allah willing, this will happen. It’s, they’re so immersed in it. And what you’ve done is, you’ve completely trashed their essence, their being. They find it very, very, very offensive. I’m a Muslim. I find it offensive. I find what’s on the other side of this [sign] very offensive. But you have that right, but you are way outside your bounds of First Amendment rights…

“I’ve spent about seven years living in other countries. When we go to other countries, it’s not uncommon for people to refer to us as ‘ugly Americans.’ This is why we hear it referred to as ‘ugly Americans,’ because we’re so concerned about our own rights, we don’t care about other people’s rights. As long as we get our say, but we don’t care about the other people’s say.” 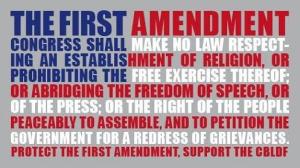 The judge’s distorted view of the first amendment was magnified by Elbayomy’s counsel, R. Mark Thomas who called this lecture “a good dressing down by the judge. The so-called victim was the antagonist and we introduced evidence that clearly showed his attitude toward Muslims. The judge didn’t do anything I wouldn’t have done if I was in that position.”

In other RELIGIOUS LIBERTY NEWS … 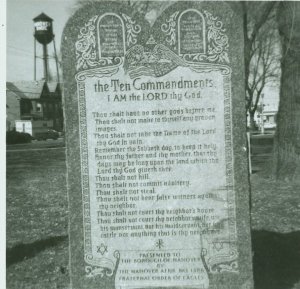 This is a HUGE victory and I can only hope & pray support for their decision to stand firm will grow!!! Stay tuned for more info as it becomes available! Gotta love the response of the people of Connellsville …

“We are done trying to be sensitive to your beliefs or lack thereof. You have tried to remove any reference to God from our society for the last 50 years and look at the condition and morality of our society today. You need to understand. Atheism is believed by only 3% of the world’s population. We do not force you to convert, do not drag you into church, and do not deny your right to believe in nothing. But stop denying us our right to have our beliefs in the public arena as well. If you want to pay for monuments to a belief in nothing, no one is stopping you. Step up to the plate and promote your beliefs if you can, but stop infringing on the free speech rights of the majority of people in this nation. We are going to fight back from now on!”

I wish all of you well

Editor’s Note: But really, there isn’t any need at all to be concerned with: a) activist judges, and b) the encroachment of Sharia into our legal system…none at all…nothing to see here…just keep ignoring it, people, and it will go away…besides NFL Football is on!

NOTE 2 via BBB: The act of the atheist was stupid and ignorant. BUT … this is what makes the USA different than other nations. There is no law against stupid! It’s supposed to be OK to speak what is on your mind without fear of recrimination. If we start making exceptions to protect the FEELINGS of others, we will see our FREEDOM of SPEECH Disintegrate before our eyes. Millions of Americans of various races, ethnicities, religions, and politics have given their lives to obtain and protect these rights guaranteed by our CONSTITUTION and the LAWS of NATURE & NATURE’S GOD!