Does this women speak for you? She SURE doesn’t speak for me or my three adult children! I’m appalled by her attitude even more than her licentiousness, not to mention her assumption that ALL women are like her.

Most of us are aware of the deliberate “dumbing down” of America’s schools and are working to counter this “educational” movement toward total inclusion by virtue of the lowest common denominator method. The jist of it is that classroom requirements are lowered to the ability of the least capable students, so no one ‘feels’ left out. Heaven forbid kids today grow up like we did, with “smart” kids and “dumb” kids. We survived and the “dumb” kids received the help they needed to be rejoined with the “smart” kids. That was the 60’s, at least that was my experience.

Now, I’m seeing the same kind of “dumbing down” in reference to character. When I was a kid, it was desirable to be a man or woman of integrity. Nothing was more important or more valuable that one’s WORD. If difficulties arose in life (after the age of 25), they were faced and dealt with. If help was needed, we asked for help.

Some of us still strive to improve our character, but sadly, there seem to be an increasing umber of Americans who have given up on character improvement. Instead, some people seek revenge, others seek money or power, still others seem only to run after anything and everything they think might bring a moment’s satisfaction. I think of the “Sandra Fluk – contraception” issue of the spring or the “Chick-fil-a” conflict. These are just two of many examples easily available in the headlines that delineate a significant line of demarcation between those who want to lower the moral standard to include every conceivable human weakness, lust, or addiction – except traditional Judeo-Christian ethics. 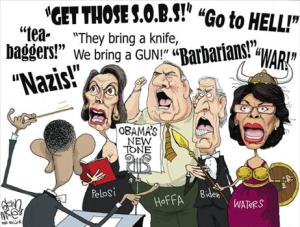 We’ve seen how the “dumbing down” movement has worked in our schools (NOT!). And we’re seeing how it is working in our morality via the media & Hollywood as we’ve seen it for years. Now, however, the fruit is really starting to stink up the place. Kids killing kids, kids having babies, parents stylishly neglecting their parental responsibilities. It’s not about contraception. It’s not about the availability of porn. It’s a general across the board lowering of the standard even within “Christian” schools, churches, and families. It’s just too much trouble to live by those darn 10 Commandments or even the “Golden Rule!” Just too … costly to our time, our self-indulgence, our “ME-time!”

For those of us who are believers in a Biblical morality or a Biblical reality, one day we will have to give an accounting of our behavior, our attitudes, and our words. Character DOES Count! Are you raising or lowering the Character Common Denominator?