“We must all hang together, or assuredly we shall all hang separately.” Benjamin Franklin (1776)

Despite a colossal political blunder derailing the conservative Republican Continuing Resolution (CR) strategy three weeks ago, which in turn led to furloughs (read: “paid vacations”) for about 17% of “non-essential” federal employees, which in turn collapsed approval ratings for anyone with an “R” after their name, which in turn resulted in Republican submission to Barack Obama’s agenda, there are three silver linings on the horizon that will pay rich political dividends. 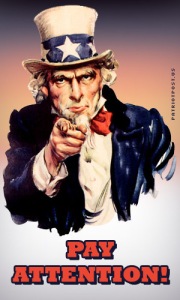 Each of these favorable outcomes will greatly benefit the campaigns of conservative Republicans for a generation if, and only if, there is a cease-fire in the foolish and fatalistic “Tea v. GOP infighting,” which undermined the outstanding CR strategy House conservative were advancing on schedule four weeks ago.

I’ll get to those opportunities in a moment, but first, let me recap where we were just four short weeks ago:

In mid-September, Republicans had Barack Obama and his Leftist NeoCom cadres on the ropes, getting pounded and losing ground fast. Obama was plagued with the IRS, Benghazi and Syrian scandals, among a growing list of other failures, which were thoroughly undermining his second term agenda.

Making matters worse for The Party of Obama, the inevitable launch of ObamaCare (the so-called “Affordable Care Act”) on October 1, a day after the deadline for the CR, was, by all accounts, going to be a cascading disaster – not just from a technical standpoint but also from a political standpoint in the months and years to come.

Hundreds of veterans descended on Washington, D.C. on Sunday under overcast skies and light rain to protest the closure of the war memorials during the government shutdown — and tore down the barricades surrounding the memorials to sounds of horns from truckers and cars and the roar of motorcycle engines.
Read more: http://dailycaller.com/2013/10/13/from-the-dc-photodesk-vets-storm-wwii-memorial-and-march-on-white-house/#ixzz2hcpVPd00

Freely based on the Hans Christian Anderson fable, The Emperor’s New Clothes

Once upon a time there lived a narcissistic President whose only worry in life was to be perceived as an intelligent, elite leader. He changed clothes almost every hour and loved to show them off to his people. Funny thing was, he changed his position on current issues just as often.

“We are two excellent tailors from the Middle East, and after many years of research we have invented an extraordinary method to weave a cloth so light and environmentally friendly that it looks invisible. As a matter of fact it is invisible to anyone who is too stupid and incompetent to appreciate its quality like most Americans.”

“Besides being invisible, your Perfectness, this spectacular cloth will be woven in colors and patterns created especially for you according to your personal Biorhythm out of recycled diapers.” The President gave the two men a large stack of freshly printed paper money in exchange for their promise to begin working on the fabric immediately.

“Just tell us what you need to get started, and we’ll give it to you.” The two merchants asked for a loom, silk, gold thread and then pretended to begin working. The President thought he had spent taxpayer money quite well: in addition to getting a new extraordinary suit, he would discover which of his subjects were ignorant and incompetent. A few days later, he called the old and wise Chief Counsel, who was considered by everyone as a man with common sense.

“Go and see how the work is proceeding,” the President told him, “and come back to let me know.”

The Chief Counsel was welcomed by the two merchants. 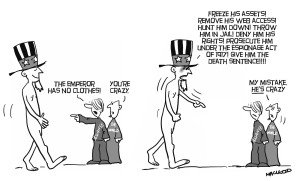 “We’re almost finished, but we need a lot more gold thread. Here, oh Wise One! Admire the colors, feel the softness!” The old man bent over the loom and tried to see the fabric that was not there. He felt cold sweat on his forehead.

“I can’t see anything,” he thought. “If I see nothing, that means I’m stupid! Or, worse, incompetent!” If the Chief Counsel admitted that he didn’t see anything, he would be discharged from his office.

“What a marvelous fabric, he said then. “I’ll certainly tell the President.” The two merchants rubbed their hands gleefully. They had almost made it. More thread was requested to finish the work.

Finally, the President received the announcement that the two merchants had come to take all the measurements needed to sew his new suit.

“Come in,” the President ordered. Even as he bowed, the two merchants pretended to be holding large roll of fabric.

“Here it is your Perfectness, the result of our labour,” the merchants said. “We have worked night and day but, at last, the most beautiful fabric is now ready to be made into an exquisite suit for you. Look at these fabulous colors and feel how fine the weave is. Clothes fit for a most powerful and exceptional Emperor, indeed!” Of course the President did not see any colors and could not feel any cloth between his fingers. He panicked and felt like fainting, but luckily his throne was right behind him, and he sat down. When he realized that no one could know that he did not see the fabric, he felt better. Nobody could find out he was stupid and incompetent. The President didn’t know that everybody else around him thought and did the very same thing.

The farce continued as the two merchants had foreseen it. Once they had taken the measurements, the two began cutting the air with scissors while sewing with their needles an invisible cloth.

“Your Perfectness, you’ll have to take off your clothes to try on your new ones.” The two merchants draped the new clothes on him, and then held up a mirror. The President was embarrassed but since none of his bystanders were, he felt relieved.

“Words fail me. Yes, this is a beautiful suit, and it certainly suits me,” the President said trying to look comfortable. “You’ve done a fine job.”

“Ulama,” the Chief Counsel said, “we have a request for you. The people have found out about this extraordinary fabric, and they are anxious to see you in your new suit.” The President was doubtful showing himself naked to the people, but then he abandoned his fears. After all, no one would know about it except the ignorant and the incompetent.

“All right,” he said. “I will grant the people this privilege.” He summoned his limo, and the ceremonial entourage was formed. A group of dignitaries and politicians rode in front of the Presidential procession and anxiously scrutinized the faces of the people in the street. All the people had gathered in the main square, pushing and shoving to get a better look. Applause welcomed the regal procession. Everyone wanted to know how stupid or incompetent his or her neighbor was but, as the President passed, a strange murmur rose from the crowd.

Everyone said, loud enough for the others to hear: “Look at the President’s new clothes. They’re beautiful!”

“What a marvellous suit!”

“And the colors! The colors of that beautiful fabric! I have never seen anything like it in my life!” They all tried to conceal their disappointment at not being able to see the clothes, and since nobody was willing to admit his own stupidity and incompetence, they all behaved as the two merchants had predicted.

A child, however, who had no important job and could only see things as his eyes showed them to him, went up to the carriage.

“The President is naked,” he said.

“Fool!” his father reprimanded, running after him. “Don’t talk nonsense!” He grabbed his child and took him away. But the boy’s remark, which had been heard by the reporters and bystanders, was reported over and over again until everyone cried:

“The boy is right! The President is naked! It’s true!”

The President realized that the people were right but could not admit it. He thought it better to continue the procession under the illusion that anyone who couldn’t see his clothes was either stupid or incompetent. He stood stiffly on his open-air limo, while behind him a page held his imaginary mantle.