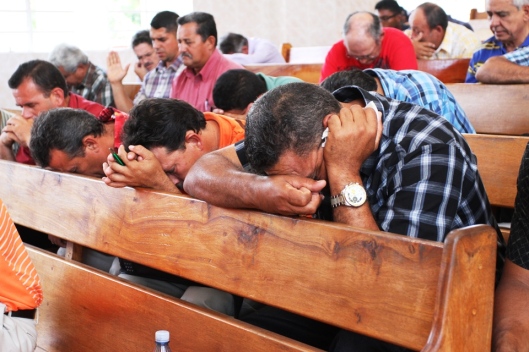 Prominent indicators confirm that the U.S. is the chief facilitator of the persecution of Christians around the world today.

According to the recently released 2014 World Watch List, which ranks the 50 nations where Christians are most persecuted, Syria is the third worst nation in the world in which to be Christian, Iraq is fourth, Afghanistan fifth, and Libya 13th. All four countries receive the strongest designation, “extreme persecution” (other designations are “severe,” “moderate,” and “sparse” persecution).

Aside from being so closely and harshly ranked, these four nations have something else in common: heavy U.S. involvement. Three-Iraq, Afghanistan, and Libya-were “liberated” thanks to U.S. forces, while in the fourth, Syria, the U.S. is actively sponsoring “freedom fighters” against the regime, many of whom would be better labeled “terrorists.”

“Open Doors, a non-denominational group supporting persecuted Christians worldwide, said on Wednesday it had documented 2,123 “martyr” killings, compared with 1,201 in 2012. There were 1,213 such deaths in Syria alone last year, it said. “This is a very minimal count based on what has been reported in the media and we can confirm,” said Frans Veerman, head of research for Open Doors. Estimates by other Christian groups put the annual figure as high as 8,000.”

Man on the TV’s gone insane, everybody’s just laughing
People ‘cross the world holding on
The earth caved in, the ocean came down crashing
My neighbor lost his house ’cause he can’t find a job
Don’t you dare pledge allegiance, don’t you dare speak of God
Speak of God
Oh! Oh! Oh! Oh!

“If it weren’t for a shamelessly dishonest, hyper-protective liberal media, the American people would know, unanimously and without doubt, that Obamanomics is killing American jobs. There is no silver lining in the December jobs numbers.

If these abominable numbers had occurred under George W. Bush’s watch, the GOP would have had hell to pay for decades. But liberal presidents always get a pass in the form of wildly far-fetched excuses and rationalizations for their failed policies.

Attentive minds, however, will not be fooled. As the liberal media live by the dishonest rationalization, so they must die by it, as well. With the help of sympathetic economists, they have been whitewashing Obama’s perennially anemic economy as being in “recovery” for 52 months now.” Read MORE

Now I’m begging for forgiveness
I wanna make a difference even in the smallest way
I’m only one person, but I can feel it working
I believe in better days
That’s why I pray

Seems “bullying” is in the news every week as either a teen commits suicide or a politician uses “bullying” language in reference to an opponent or opposition party. If “bullying” is defined as someone acting loudly arrogant and overbearing, then many in the headlines fall into that category. Problem is, we, as adults, are teaching our kids how to bully and when to bully, and it starts in the White House! Until we, as adults, remember we are all Americans & we all have a voice, our kids will pay the price for our bigotry.

“On December 4, 2013 Randi Weingarten, president of the 1.5-million member American Federation of Teachers (AFT), spoke on C-Span about bullying, particularly of gay students. Ms. Weingarten said, with surprise in her voice, that she doesn’t understand why gay students are still bullied in public schools, because in 2013, “It’s cool to be gay.” She also said she is gay, and now speaks about it openly.

As a psychotherapist, I tell clients that being surprised by another person’s behavior often results from erroneous assumptions about the person, usually because you see them as you want them to be rather than as they are. As Ms. Weingarten talked about the love that not only dares speak its name but never shuts its yap, I imagined how it would sound if a heterosexual male schoolteacher said, “The way I do sex is cool.” Read MORE

These demons from my past haunt me every night
And I just can’t get through it
If I could forget them on my own, I’ll let go and just move on
But heaven knows I am only human

Politicians have chosen to make firearms an issue in place of the more controversial issue of Mental illness. In doing so, they totally miss the point in an attempt to distract the public and give a semblance of “taking action!” We, as Americans, must demand better! Our streets are littered with people … human beings who have lost their way by means of mental illness, not to be confused with substance abuse!

After every mass shooting, I write a variant of the same column. Perhaps I’ll republish this one when the next attack happens.

The increase in mass shootings over the course of the past several decades is not imaginary. In 2000, The New York Times analyzed 100 mass shootings between 1949 and 1999 and found that 73 of them had happened since 1990. Since 2000, according to Mother Jones magazine, there have been 33 more, including the recent massacre at the Navy Yard. The majority of the killers have untreated mental illness. Read MORE

Please PRAY, now more than ever …

God asks us – and commands us – in I Timothy 2:1-2 and Romans 13 to pray for our nation and its leaders. This boldness in prayer isn’t just about asking God for big things, but stepping out and trusting Him in faith, despite how impossible circumstances may seem. We can make a difference in America by praying bold prayers…prayers with answers that are only possible by God.

It’s our purpose as a ministry to use all of our available resources to mobilize an army of prayer warriors, people – like you – who unashamedly proclaim: “We Pray For America.”

In keeping with this purpose, we’re introducing a new BOLD (Beside Our Leaders Daily) prayer initiative for impacting America’s leaders. “We the People” will be the largest and most valiant prayer campaign we’ve ever undertaken as the largest fulltime prayer movement for our nation. During the final six months of 2013, we’ll be giving you focused and specific prayer direction and information on the highest positions within our government. Each day we’ll move office-by-office and department-by-department — from the Administration, Congress, the judiciary, and our military — praying for those individuals within our government who shape the course of this great nation.

As part of this “boots-on-the-ground” approach, we’ll also let each leader know that hundreds of thousands of people will be praying for them as they work and possibly make important decisions about our country’s future.

Your bold prayers and faith represent the same kind of courage that launched our great nation 237 years ago and that has sustained us through wars, economic downturns and terrorist attacks.

This bold plan to inspire millions of Americans to pray for their leaders has received some significant financial help by several friends of this ministry. But, they recognize that their giving alone is not enough to underwrite the entire cost of this intensive six month campaign. So, we are asking for your prayerful, bold financial help. They have graciously offered to match dollar-for-dollar any gift of $25 or more given now, or promised through December 31. But, we must know of your faith-giving plans before midnight on July 4.

That’s right – ALL your financial gifts of $25 or more for the rest of this year will be doubled. Starting NOW … any gift received by July 4th and your monthly faith commitments will be doubled as you give each month until the end of the year. The deadline to give now or indicate your faith promise is midnight on July 4th.

In I Samuel 2:30, God promises to honor a people and nation that honor him, so let’s keep praying. We believe that the recent scandals coming out of our nation’s capital are just one way God is answering the prayers of our members to “bring to light” the wrongs and deceptions in our government. We thank you for your generous support and for being among those who boldly proclaim: “We Pray For America.”