More and more, Americans are seeing and feeling the restrictive bonds of tyranny. Now, you may think I am over-reacting, but let me ask you your definition of tyranny? The first definition listed here, is “arbitrary or unrestrained exercise of power; despotic abuse of authority.”

Repeatedly, we have witnessed President Obama’s disrespect for the Constitution, the ideals that formed the bedrock for our nation, and his disdain for the members of the military who have put their very lives on the line to purchase and defend the Liberty declared in 1776. While past leaders have stretched Executive authority, no one has flaunted their defiance in the face of the people the way this administration has … as evidenced just this week by our Sec of State’s statement, “What’s the difference …

When Xerxes I of Persia demanded that the Spartans lay down their arms and surrender at the Battle of Thermopylae, King Leonidas I responded with defiance, “Molon labe”, “come and take!”. While Leonidas’ 300 could not stand forever against this invading force, love of country and a fervent desire to protect Sparta and its citizens from an enslaving tyrant gave the Spartan warriors the impetus they needed to fight to the death of every last man.

“Throughout history we see example after example of people standing against tyrants. America is no exception. We fought the Revolutionary war to gain our freedom from a king who used the newfound wealth from the colonies to help fund his kingdom, all the while treating us like the redheaded step children. We threw off those shackles in defiance of tyranny. Thus began the great American Experiment. There was born the greatest nation in the world.

“Our Founding Fathers were well acquainted with history and her ugly past. They crafted the Constitution and the Bill of Rights with that history, including their own recent emancipation, in mind. Understanding that men are born in liberty, endowed by their Creator, the Constitution was written to protect those God given rights. These venerated documents are timeless.

The second amendment is our greatest protection to help us guard against the infringement of the others. While progressives scream that we need fewer guns to be safe, nothing could be further from the truth. And once again, history bears us out. In every instance of tyrannical takeover, the first act of the invader has been to disarm its people. But you know that history. It has been spoken of innumerable times. We must admit that not every case of disarmament has been by a tyrant. There are also historic cases of nations taking guns from its citizens because they believed it would make them safer. And in every case, once again, they have been proven wrong.

“In 1997 Australia instituted a national gun ban and citizens turned in more than 640,000 guns for destruction. What was the result? Accidental gun deaths are up 300% from the pre ban years, robbery and armed robbery have increased 20%, the assault rate has increased 200%, and homicides with firearms are up 171% in the state of Victoria alone. What does that tell you folks? That the criminals STILL have guns, that law abiding citizens are now unable to protect themselves on a level playing field, that the black market for illegal guns is thriving, and that gun bans only hurt a nations citizenry and help criminals.

“U.S. Senator Ben Cardin, a Democrat from Maryland, recently added his support to President Obama’s call for gun control measures. Liberals across the nation have convinced their mindless sheeple that “assault weapons” need to be taken out of the hands of everyday Americans and that no one has need of a magazine that holds more than ten rounds.

Time and again I have asked the question, “what is an assault weapon?” and have been answered with dumbfounded silence. I own a Mossberg 500. It has a pistol grip and a chainsaw handle. I have opted to remove the chainsaw handle and add an Archangel tactical stock to it. When it is finished it will look pretty awesome. I like to accessorize my guns, much like I enjoy wearing earrings and having a wide selection of purses. It doesn’t change the nature of the gun. It is a semi automatic 12 gauge shotgun. That is all it will ever be. But it will look like what liberals think of as an assault weapon. And so they would ban it if we would let them. Sadly, we must fight the good fight largely because of their lack of education and willingness to understand. Like a child throwing a tantrum, they want it their way. What I wouldn’t give to have just one gun Nazi give a logical answer to my logical questions on the subject. Alas it is not to be. There are no logical answers. Plenty of anger and name calling, no answers. Guns are a tool and nothing more. Law abiding citizens don’t commit these atrocities. We need to be looking at the people, not the tools. We certainly do not need to leave citizens defenseless to face criminals and lunatics. This is the antithesis of logic. 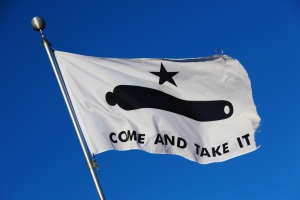 Click this photo for more info on this flag!

“Ultimately the right to bear arms is a safeguard against tyrants. But it also serves to enable citizens to participate every day in their own safety and well being. There are many good reasons to cling to our guns and not one good reason to give them up. Only a government with tyrannical motives would seek to disarm its people. We must scream our defiance in the face of the single greatest threat to our Republic. We must hold onto our guns and make it clear to the liberals that we will not let them go willingly, that a 21st century civil war will ensue upon any action taken by them to pry those guns from our hands.

“We must shout from the rooftops, MOLON LABE! and we must mean it!”

Sen Paul may not question the motives of the administration, but I do! At some point, We, as Americans, will have to make a stand. How much liberty are we willing to surrender in the HOPE for some sense of security while immorality is permitted unchecked?

Regardless your thoughts on guns, there is no room for misunderstanding the Second Amendment of the Constitution. It says the right to keep and bear arms, SHALL NOT BE INFRINGED! Period! Our President has other plans, and at some point, it will be up to the people of America to make a decision. Will we bow like the people of Chicago (or any of the other cities, towns, or nations that have turned in their weapons,) trust our President, and experience a surge in gun violence as gangs and criminals run unchecked? or will we STAND on our Constitutional rights!

Can we really TRUST our government?