A Day to Pray, God, Organizing for Action, Presidential Prayer Team, Save the USA!

As I’m sure you all know, Monday is Inauguration Day, 2013, and many, many Americans are disgruntled about the manner in which the Presidency was retained. The man in the Oval Office appears to have no moral character to speak of, and this is reflected throughout most of the Congress, as well. Yes, there are a handful of exceptional men and women, but they are no outnumbered and overpowered, the effect of their good character is diminished.

At this point in our history, only God is big enough and strong enough to reverse the downward spiral of our no godless culture … if He will. For clarity, I’m not saying the Church … I’m saying Almighty GOD, YAHWEH, JEHOVAH … not allah! For a large part of the 20th Century, the Progressive movement (like the “Enlightenment” era) sought to use science and math to trump faith. We experienced a wave of human secularism that swept our education system from Kindergarten through the elite universities. “Evolution” trumped “Intelligent Design,” not because of superior evidence, but because of political pressure, i.e. “political correctness!”

“If we look at it analytically, if we look at it historically, we quickly find out exactly what it is. Political Correctness is cultural Marxism. It is Marxism translated from economic into cultural terms. It is an effort that goes back not to the 1960s and the hippies and the peace movement, but back to World War I. If we compare the basic tenets of Political Correctness with classical Marxism the parallels are very obvious.

“First of all, both are totalitarian ideologies. The totalitarian nature of Political Correctness is revealed nowhere more clearly than on college campuses, many of which at this point are small ivy covered North Koreas, where the student or faculty member who dares to cross any of the lines set up by the gender feminist or the homosexual-rights activists, or the local black or Hispanic group, or any of the other sainted “victims” groups that PC revolves around, quickly find themselves in judicial trouble. Within the small legal system of the college, they face formal charges – some star-chamber proceeding – and punishment. That is a little look into the future that Political Correctness intends for the nation as a whole.” 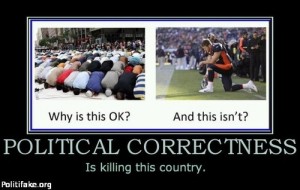 This is where we live today. This is why those of us with faith in GOD must pray for our nation. I’m counting tomorrow as a START date … with no defined end date, but until we see GOD move in our midst to bring about a righteous change. For too long, we, the faithful, have done nothing. We have allowed deception to overtake the people of America and steal their (our) birthright – the American Dream!

Even the Presidential Prayer Team has written:

“President Barack Obama on Friday announced the relaunch of his remaining campaign apparatus as a new tax-exempt group called Organizing for Action that will “play an active role” in “mobilizing around and speaking out in support of important legislation” during his second term.

“We may have started this as a longshot presidential primary campaign in 2007, but it’s always been about more than just winning an election. [INDEED! It is about redefining AMERICA!]

Together, we’ve made our communities stronger, we’ve fought for historic legislation, and we’ve brought more people than ever before into the political process,” Obama wrote in an email to supporters. “Organizing for Action will be a permanent commitment to this mission.” “We’ve got to keep working on growing the economy from the middle out, along with making meaningful progress on the issues we care about – immigration reform, climate change, balanced deficit reduction, reducing gun violence, and the implementation of the Affordable Care Act,” Obama wrote. “I’m not going to be able to take them on without you.” Organizing for Action will be separate from the Democratic National Committee, with Obama’s 2012 campaign manager, Jim Messina, serving as the national chairman of the group.”

No more excuses! We must each be an asset to our nation!

They, the Progressives who want to recreate America into something OTHER than what our Founders (and GOD) designed via our Declaration of Independence and US Constitution, are organized and lead by the “Community Organizer-in-Chief.” Those of us who oppose these measures and policies must also, for the sake of our future generations, organize and pray for GOD’s direction and strategy to defeat the destructive powers at work in our nation. We must!

If you are in agreement, please share this, repost it … broadcast it high and low! Thanks! God, Save the USA!