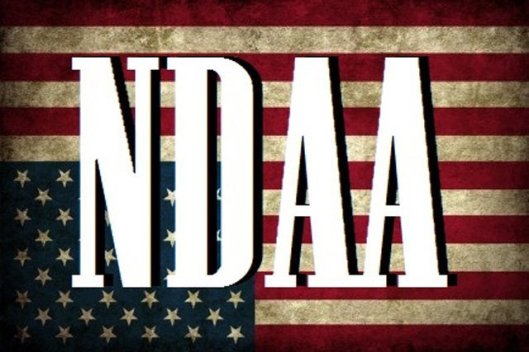 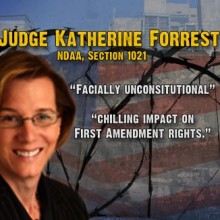 U.S. District Court Judge Katherine Forrest made permanent an injunction against enforcement of Section 1021 of the National Defense Authorization Act, which was declared unconstitutional. Section 1021 is a provision that allows the federal government to have the military detain and hold indefinitely any person, including U.S. citizens, on simply claiming that they are suspected of terrorism or involved with terrorists and requires absolutely no evidence be provided against them. No due process is given to the detainee. Consequently Section 1022 is tied to 1021 in that it requires military custody, not local authorities.

Judge Forrest said the section was a “chilling impact on First Amendment rights.”

The NDAA’s indefinite detention policy was signed into law by Barack Obama on January 1 of this year, supported by members of the Democrat, as well as, the Republican Parties and was supported by the Republican candidate for President Mitt Romney during the primary debates.

The Obama administration took only a few hours to file an appeal of the judge’s ruling and attorneys even asked her to halt enforcement of her order.

In Forrest’s order she wrote,

“The government put forth the qualified position that plaintiffs’ particular activities, as described at the hearing, if described accurately, if they were independent, and without more, would not subject plaintiffs to military detention under Section 1021.”

“The government did not – and does not – generally agree or anywhere argue that activities protected by the First Amendment could not subject an individual to indefinite military detention under Section 1021,” she continued.
Interestingly enough, the same media that provided cover for Obama during his rise to the Oval Office are the same ones who brought this case to trial. The journalists “contend the controversial section allows for detention of citizens and residents taken into custody in the U.S. on “suspicion of providing substantial support” to anyone engaged in hostilities against the U.S. The lawsuit alleges the law is vague and could be read to authorize the arrest and detention of people whose speech or associations are protected by the First Amendment. They wonder whether interviewing a member of AL-Qaeda would be considered ‘substantial support.’”

BLOGGER’s NOTE: I urge you, fellow Patriots, to prayerfully support this courageous American for taking a stand for FREEDOM. We all know she will pay for her stand one way or another.

2 thoughts on “US Judge Strikes Down NDAA’s ‘Indefinite Detention’”