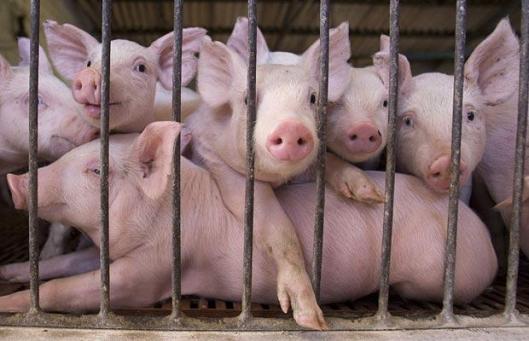 The Michigan State Department of Natural Resources has outlawed feral pigs. They say that the now-illegal swine are considered invasive and, as of April 1, they can arrest farmers that own hogs that match nine characteristics described by the state. Mark Baker of Baker’s Green Acres is one of two farmers in the state battling for the right to have feral pigs.

What use to be a traditional means of providing for one’s family has now come under assault by the State. When I use the term assault, I mean a literal assault. The State of Michigan’s Department of Natural Resources has carried out two armed raids of local pig farmers in the state, quite possibly in violation of the Fourth Amendment.

According to Natural News the raids involved six vehicles and ten armed men.

The most bizarre reason for the raid was that the pigs have been determined to be “invasive speices” under a new “Invasive Species Order” (ISO). So let’s get this straight. Things that use to be considered traditional livestock are now “invasive species”.

We aren’t told how these pigs are invasive. In fact since they are on a farm and farmers farm, then it would be logical to assume that the farmers brought the pigs there to live and in the process were hoping those pigs would reproduce, which would cause them to prosper as a result of their investment in the pigs.

The case though turns worse. There was not only an armed raid on the farms, but the farmers were forced to shoot their own pigs, including the baby piglets in order to comply with the law. Now look I’m not anymore emotional about baby pigs versus adult pigs (though you have to admit they are a bit cuter), but the simple fact that farmers were forced to kill their own livestock, without a real threat from said livestock, is a bit much.

One of the farmer’s attorney, Joseph O’Leary said,

“I think this is an unconstitutional order, these actions of the DNR are way out of bounds. To take what was six months ago an entirely legal activity, and suddenly people are felons over it. They’re not growing drugs, running guns or killing anybody, they’re raising animals pursuant to USDA regulations and state of Michigan regulations. They haven’t done anything wrong here, and the DNR is treating them like they are hardened criminals.”

I completely agree with Joseph O’Leary. The government there in Michigan is as out of control as the government in Amish country, staking out what they presume are “Raw Milk Terrorists”, which costs taxpayers millions. Yet raw milk has not been the culprit for e-coli or any other diseases. In fact, it is the big milk production companies that are the ones who have to pasteurize their milk because of the enormous amounts of blood, pus, and feces in the milk. They have to kill it off. In most instances, that is not the case with local farmers… READ MORE