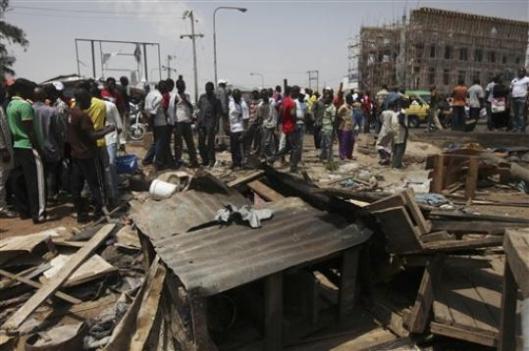 People gathered around the wreckage of a damaged road side tea shop following an explosion in Kaduna, Nigeria Monday, April 9, 2012. A suicide car bomb that killed at least 38 people in Nigeria over the weekend affected Nigerians across religious and ethnic lines that divide this oil-rich nation. Witnesses in Kaduna told The Associated Press on Monday that those affected ranged from young Muslim men of the Hausa Fulani people who make their living driving motorcycle taxis, the Yoruba people of Nigeria's southwest and the Christian Igbo people of the southeast. (AP Photos/Sunday Alamba)

In recent years, we’ve begun to brace ourselves for news of bombings, burnings, and other attacks on churches full of Christian worshipers on religious holy days — for example, in Nigeria, Egypt, Iraq, Pakistan, Indonesia, the Philippines, and Ethiopia. This violence comes out of the growing community of Salafi Muslims, adherents of the radical brand of Islam that is Saudi Arabia’s official doctrine and which Saudi Arabia exports throughout the Sunni world. We’ve also come to expect the willful blindness of the Obama administration about the religious implications of these horrific events. Last weekend’s Easter Sunday was no exception.

On Easter morning, a Protestant church in Kaduna, Nigeria, was targeted by a suicide car bombing that killed 39 and wounded dozens, apparently the handiwork of Boko Haram, the Salafi network whose stated aim is to turn Africa’s largest country into a sharia state. Last Christmas, Boko Haram had bombed St. Theresa’s Catholic Church outside the capital Abuja killing 44 worshipers, as well as attacked various Christian churches in the towns of Jos, Kano, Gadaka, and Damaturu. 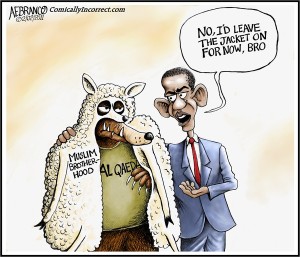 Four days have now passed and there has been no official comment from the Obama administration about this most recent monstrous example of anti-Christian persecution. However, on April 8, that is, Easter, Secretary Clinton did manage to issue one press release. It announced that “today we celebrate the history, impact and culture of Romani people” (formerly called “gypsies”), and inveighed against Europe, demanding that it become “more inclusive.” But for the northern Nigerian Christians savagely attacked on one of their most important religious days, there has not been a word of condolence.

Even worse, the day after the Nigeria church bombing, at a forum on U.S. policy toward Nigeria held at Washington’s Center for Strategic and International Studies, Clinton’s Assistant Secretary of State for African Affairs Johnnie Carson — overlooking Boko Haram’s self-proclaimed identity, pattern of behavior, statements and very name, which means “Western education is a sin” — publicly denied that Boko Haram has religious motives. He went out of his way to stress: “Religion is not driving extremist violence in . . . northern Nigeria.”…….. READ MORE 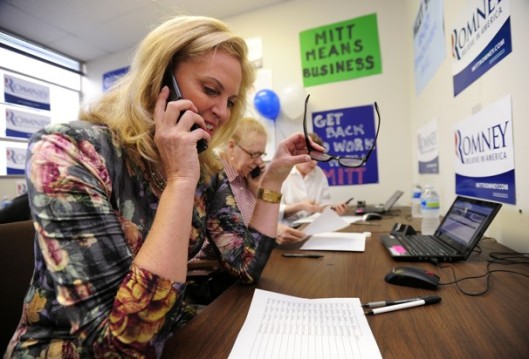 NO ONE is going to Squeeze this Round Peg into their Square Hole!

Exactly who is waging this so-called “war on women?” Who is it that wants to limit who and what a woman is, and can handle in her own life? Who is it that likes to push everyone into one mold, whether woman, man, left, right, Black, White, Asian, because, of course, we are unable to decide for ourselves! … Yes, it’s the same party that has fabricated this War on Women that fills the news and tabloids. The same party of those who burned their bras in the 70’s and emasculated men across the nation by telling them not to open doors or “prefer” them as the “weaker vessel.”

Once again, it is the DEMOCRATIC PARTY that wants every woman to fit THEIR idea of what a women needs to be. Where does it say in the Declaration of independence or the Constitution that women must choose to be either a career woman, or a mother – or in other words, according to them, a Winner (career women) or a Loser (stay-at-home mom).

Pardon my anti-socialist/humanist viewpoint but NO ONE is going to squeeze this round peg into their square hole! Good golly Miss Molly! It has taken decades for women to gain relative equality to men. There have been some benefits in their efforts. However, the really silly part is that men and women are NOT equal! We are NOT the same! We are equal UNDER THE LAW, says the Constitution, but we are anything but equal – THANK GOD! WOMEN are not equal, either! We cannot all be squeezed into the same mold. Some women must work outside the home, and they may or may not have the opportunity for an education. Some women excel without post-secondary education! Some women may be able to list multiple degrees after their name, but not wish for a family. HOW DARE … the OBAMA administration declare “WAR ON WOMEN,” particularly those who choose to stay-at-home with their children. There truly is no higher calling that the nurturing of children! 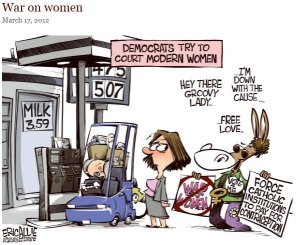 The progressive movement over the last several decades has worked exceedingly hard to convince us that “we are all created equal.” They preach it in our schools. They preach it through TV and movies. They preach it through other mainline media outlets. The most effective lies all contain an element of truth, and this lie is close tot he truth, but don’t quite match up. We do not all have IQ’s of 180! We all cannot write a symphony or even a country ballad. We cannot all comprehend E=MC² or astrophysics! It is our INDIVIDUAL-ism that is so valuable! It is our differences that make our culture so rich. The same applies to women! We are NOT all the same, neither should we all be expected to seek the same things. Our Constitution guarantees us the RIGHT to PURSUE our own HAPPINESS! For some, that means staying at home with babies. For others, it means juggling both career and family. And for still others, it means putting all their energy into their career and forgoing family. Should the GOVERNMENT decide what is acceptable for women? REALLY? Where is the outrage, ladies???

Mitt Romney was losing the so-called “war on women.” Badly. Until Democratic operative Hilary Rosen appeared on CNN Wednesday night and seemingly derided his wife’s decision to stay at home and raise the couple’s five boys.

“His wife has actually never worked a day in her life,” Rosen told Anderson Cooper. “She’s never really dealt with the kinds of economic issues that a majority of the women in this country are facing in terms of how do we feed our kids, how do we send them to school and how do we — why we worry about their future.”

The rhetorical war over women between President Obama and Mitt Romney escalated Wednesday night as Romney’s wife Ann launched a Twitter account to personally respond to a Democratic pundit who had dismissed her knowledge about the economy by saying she “never worked a day in her life.”

“His wife has actually never worked a day in her life,” Rosen said on Anderson Cooper’s “AC360” show. “She’s never really dealt with the kinds of economic issues that a majority of the women in this country are facing in terms of how do we feed our kids, how do we send them to school and how do we — why we worry about their future.”

PLANNED PARENTHOOD – providing more abortions than any other claimed service. All we WOMEN ask is to give our baby girls and baby boys a chance to live! 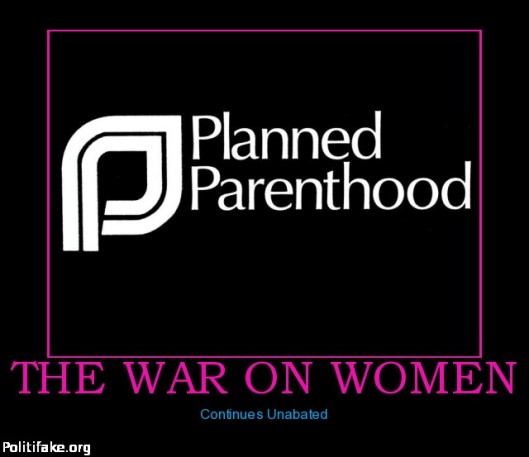 The Orchestrated War on Women