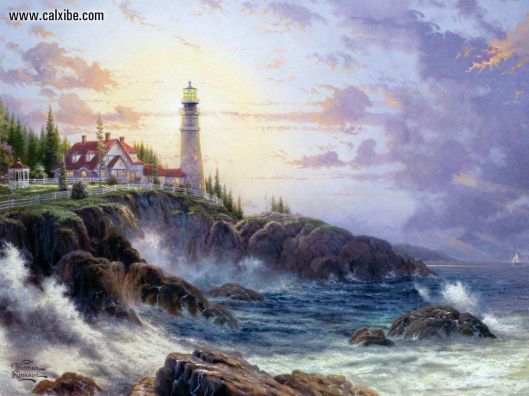 (CBS/AP) One of the most successful artists of all time, prolific painter Thomas Kinkade – the self-described “Painter of Light” – died Friday at the age of 54.

A spokesperson for the Kinkade family said the artist died at home in Los Gatos, Calif., apparently of natural causes.

Kinkade’s paintings were anything but controversial, depicting scenes of a light-filled America with a heavy emphasis on home, hearth and church. His sentimental scenes of country gardens and pastoral landscapes in dewy morning light were beloved by many but criticized by the art establishment.

The painter once said that he had something in common with Walt Disney and Norman Rockwell: He wanted to make people happy.

Those light-infused renderings are often prominently displayed in buildings, malls, and on products — generally depicting tranquil scenes with lush landscaping and streams running nearby. Many contain images from Bible passages.

“I’m a warrior for light,” Kinkade, a self-described devout Christian, told the San Jose Mercury News in 2002, a reference to the medieval practice of using light to symbolize the divine. “With whatever talent and resources I have, I’m trying to bring light to penetrate the darkness many people feel.” ……… MORE HERE

4 thoughts on ““Painter of Light” Thomas Kinkade dies at 54”