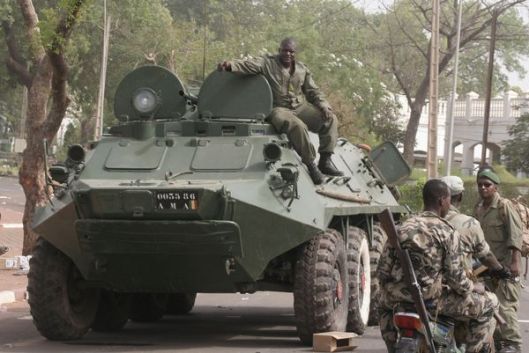 On March 22, renegade Malian soldiers announced the unexpected seizure of the nation of Mali, former pearl of democracy in West Africa for the last 22 years. Dissatisfaction with the government’s efforts against guerilla war tactics in the north led soldiers to these measures. Military announced seizure of the country’s national television station and presidential palace in a formal coup attempt. Mali soldiers suspended the constitution and dissolved all public institutions, as well as closed the airport and all land borders. The whereabouts of the president is unknown.

These forces established a transitional government, in hopes to better handle local Tuareg insurgency. The United Nations now seeks $35.6 million to deal with this humanitarian crisis as thousands of Malians flee to surrounding countries. Tension is high as the unfolding of this situation remains unclear. The United States calls for the immediate restoration of legitimately elected governmental rule.

Have you noticed that the “religion of Peace” is involved in just about every conflict currently raging on this globe? hm!

“REPORTING FROM KANO, NIGERIA — Tuareg rebels seized territory in northern Mali on Friday in the wake of a military coup in the distant capital that left the military in disarray.

“There were reports of soldiers abandoning their posts and running away in the confusion that followed the coup in Bamako on Thursday, raising speculation that the rebels could gain control of the north.

“State television went off the air Friday, amid speculation of a counter-coup by troops loyal to President Amadou Toumani Toure.

“The government was ousted by a group of disgruntled soldiers furious at its failure to properly arm and equip sparse military forces assigned to face the heavily armed and combat-hardened Tuaregs. Mali’s military has only 7,000 soldiers.

“The African Union on Friday suspended Mali’s membership. The European Union suspended development activities in the country, which has already been hit hard by a food crisis and a collapse of tourism because of kidnappings of foreigners by an Al Qaeda affiliate, Al Qaeda in the Islamic Maghreb. The EU said humanitarian aid wouldn’t be affected.

“Jean Ping, an African Union official, told reporters in Addis Ababa, Ethiopia, that Toure, 63, was safe near Bamako. “We have been told that the president is safe, protected by a certain number of loyalists,” Ping said.

“As the army retreated from northern towns, the rebels’ group, the National Movement for the Liberation of Azawad, took the northern town of of Anefis on Thursday and were threatening Kidal and Timbuktu on Friday, according to news reports.”

“As the administration continues to stifle domestic fossil-fuels production on a number of fronts, it also refuses to lift a finger diplomatically to support an American company being shaken down for billions of dollars by the hard-leftist, virulently anti-American government of Ecuador. Indeed, the international court at The Hague has done far more to support the California-based Chevron Corp. than has the U.S. State Department, much less the West Wing.

“It seems that barely a month goes by without ample new evidence of Ecuadorian corruption continuing to pour in, including new developments just last week.

“(Apologies in advance: There are lots of moving parts here — but the weight of the perfidy involved requires a thorough accounting.)

“The long-running case involves claims of up to $27 billion against Chevron alleging that Texaco (now owned by Chevron) supposedly fouled water supplies in Ecuador during a 20-year-lease that expired in 1992. Never mind that Ecuador’s government itself in 1998 signed “final release” papers officially certifying that Texaco had left behind no environmental damage.

“For now, let’s spare the long litany of prior outrages in this case that has moved American judges to label the anti-Chevron position as “fraud.” The latest developments are fodder enough. As the Associated Press reported March 7, the Ecuadorian judge who ruled against Chevron in the case has been dismissed from his office for corruptly freeing an alleged major drug trafficker. Also dismissed for the same offense was another judge who had helped keep the farce alive by presiding over earlier proceedings in the Chevron lawsuit. Yet another judge had been removed from the case shortly before an expected ruling, after Chevron unearthed a video appearing to show the judge participating in a massive bribery scheme to rig proceedings against the oil company.

“This further evidence that much of the Ecuadorian judiciary, especially on this case, is hopelessly embroiled in illegality, comes on top of a February 17 ruling by the Permanent Court of Arbitration at The Hague preventing enforcement of the judgment against Chevron. While not a final decision on the merits of Chevron’s allegations that Ecuador’s courts acted corruptly, The Hague’s interim order is the second time this international body has found Chevron’s claims “sufficiently serious” to order that Ecuador’s judgment be put on hold.

“Amazingly, the now-disgraced Ecuadorian judge who ruled against Chevron already had been shown, in the (undisputed) words of a Chevron court filing, to have allowed the lawyers for the anti-Chevron plaintiffs to “ghostwr[i]te the Ecuadorian judgment itself, copying verbatim into the judgment large quantities of Defendants’ unfiled work product – including errors.”

“Meanwhile, the American lawyers and activists driving this case also continue to be embarrassed by exposure of behavior that is at least tawdry, and sometimes worse (again, in the word used by several American judges, “fraud,” as part of an investigation into those lawyers’ possible involvement in racketeering). The allegations against Chevron have become trendy, celebrity rallying points for the American left. But in January, the New York Post broke the story that one of the most prominent of those celebrities – Kerry Kennedy, daughter of the late Robert Kennedy and ex-wife of New York Gov. Andrew Cuomo – had hardly been motivated by pure altruism. Instead, she was secretly paid $50,000 for her advocacy, plus another $10,000 per month, plus given a stake in the case worth as much as $40 million if Chevron ever pays the full award….MORE HERE