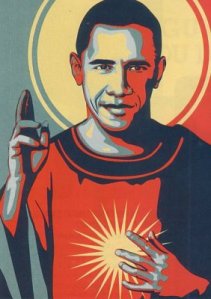 The skyrocketing pace of Obama’s rise to power brought with it remarkably few details of his past. No girlfriends, no grades, no records of any kind, yet with apparently little effort, he was chosen as the Left’s Messiah. Young coed’s swooned at his visage. Crowds cheered his every well-metered word. “Hope & change” were his battle cry, and now … ?

His initial campaign was impassioned, empowering, and positive. It inspired people eager … for whatever they thought they lacked. His message was just ambiguous enough that those dissatisfied with the Bush administration life in general, people could fill in the blanks in their minds and create their own agenda. if they wanted the wars to end, they imagined Obama pronouncing the wars over and the soldiers returning home. If they wanted to buy a bigger house, they imagined more lenient mortgage regulations and better interest rates lay ahead under Obama’s reign. It was all in the imagination because though his words were pretty and sounded elegant, there was no substance. That, at least, continues to be true.

After nearly three years in office, his words remain the same, the substance just as ambiguous, but now spoken in blame of Bush, of the TEA Party, of Republicans, of the Muslim Spring, of the earthquake in Japan … He takes NO RESPONSIBILITY for even the slightest misjudgment or error. After all, he is “Messiah!”

But “Hark!” What light through yonder window breaks? Could it be a NEW Messiah? Historically, there is evidence the Left enjoys a record of creating “Messiahs”, from FDR, to JFK to Obama … and now “Lizzy” Warren?

On the campaign trail in Massachusetts last month with the Senate candidate Elizabeth Warren, I bore witness to acts of extreme giddiness: a 20-year-old student jumping up and down, exclaiming, “Oh, my God, I am obsessed with her”; a third-year law student of Warren’s comparing her to a superhero (“Wonder Woman wishes she could be Professor Warren”); a man stopping Warren on the street and introducing himself as the guy who recently passed her a mash note on a plane (“I was hitting on you,” he said)…

Elizabeth Warren on the campaign trail in Massachusetts, where she has inspired acts of extreme giddiness.

“Even though she’s running for the Senate and not for the presidency, the early devotion to Warren recalls the ardor once felt by many for Obama. On its face, this is odd: Warren is not a world-class orator, she is not young or shiny or new, she doesn’t fizz with the promise of American possibility that made the Obama campaign pop. Instead, she’s a mild-mannered Harvard bankruptcy-law professor and a grandmother of three, a member of the older-white-lady demographic (she’s 62) that was written off in 2008 as being the antimatter of hope and change.

“And yet, on a deeper level, her popularity makes perfect sense. Embracing Warren as the next “one” is, in part, a way of getting over Obama; she provides an optimistic distraction from the fact that under our current president, too little has changed, for reasons having to do both with the limitations of the political system and the limitations of the man. She makes people forget that estimations of him were too overheated, trust in his powers too fervid. As the feminist philanthropist Barbara Lee told me of Warren, “This moment of disillusion is why people find her so compelling, because she brings forth the best in people and she brings back that excitement.” CONTINUE READING

What is it that makes the Left so NEEDY?

Why do the Democrats continue to build and replace Messiah figures? The right doesn’t do it! The closest the Right has to a “Messiah” figure is Reagan, but the idolization isn’t even close! Maybe it is because more Right-leaners already have a Messiah, a real One, so there isn’t the need for a fake.

Barack Obama is so doomed politically that he sits behind his desk in the Oval Office with a vulture on each shoulder. And every day at noon, Joe Biden comes in dressed as the Grim Reaper and they all play gin.

I know this because the poll gods tell me this. A recent McClatchy/Marist poll says that 49 percent of voters say they definitely plan to vote against Obama in 2012.

“America’s frustration is justified –Congress cannot walk on water, heal the hopeless, change a single heart, or dissolve human suffering, yet we expect nothing less from them. If you expect a messiah and get a senator instead, no wonder their approval ratings are at record lows!”

If we’re waiting for a Messiah to arise in DC, it may be some time until we see things turn around. If, on the other hand, we begin, one by one, to stand … to link arms …to be willing to WORK at building an America we want, then we may achieve a restoration of the “Experiment” initiated by our divinely inspired Founding Fathers.

Did you know that since 1774, a Christian pastor has been invited to speak and pray at the opening of every session of Congress? Through crisis after crisis, every representative would bow his or her head daily and invoked God’s wisdom to meet the challenges our nation faced. Even at the Constitutional Convention in 1787, when negotiations for a national government were falling apart due to partisan rancor and the future of the newborn country appeared grim, it was Benjamin Franklin who called the assembly to their knees in prayer asking God’s help every morning, saying:

In this situation of this Assembly, groping as it were in the dark to find political truth, and scarce able to distinguish it when presented to us, how has it happened, Sir, that we have not hitherto once thought of humbly applying to the Father of lights to illuminate our understandings?

In the beginning of the Contest with Great Britain, when we were sensible of danger we had daily prayer in this room for the divine protection. Our prayers, Sir, were heard, and they were graciously answered. […] And have we now forgotten that powerful friend? or do we imagine that we no longer need his assistance? […] We have been assured, Sir, in the sacred writings, that “except the Lord build the House they labour in vain that build it.“

And Just for Fun …

I have lived, Sir, a long time, and the longer I live, the more convincing proofs I see of this truth – that God Governs in the affairs of men. And if a sparrow cannot fall to the ground without His notice, is it probable that an empire can rise without His aid?

~Benjamin Franklin, excerpt from his speech to the Constitutional Convention, June 28, 1787

We seek no political Messiah,
only Men and Women of Integrity
willing to Serve.