“Religion and good morals are the only solid foundations
of public liberty and happiness.
[N]either the wisest constitution nor the wisest laws
will secure the liberty and happiness of a people
whose manners are universally corrupt.
A general dissolution of the principles and manners
will more surely overthrow the liberties of America
than the whole force of the common enemy.
While the people are virtuous, they cannot be subdued;
but when once they lose their virtue,
they will be ready to surrender their liberties
to the first external or internal invader.”
Samuel Adams

Amazingly STUPID questions pushed and shoved by MSNBC’s Martin Bashsir at Apostle Claver, and others. The sketchiness of the whole topic and the way the information has surfaced is so … AGGRAVATING! What ever happened to FACTS? Remember them? When I was in school, journalists were reminded repeatedly to FIRST, get the facts, THEN, build your story around those facts! Today’s media is paid by the Left to use any means possible to taint the Right. Period! Facts are no longer necessary, as demonstrated by this case, and thee Solyndra issue, and Fast & Furious … Where has the media been in those issues? But I digress …

RagingElephants.org Billboards Up In Austin, TX 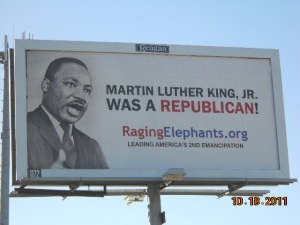 “On this past Sunday the Dr. Martin Luther King, Jr. Memorial was dedicated on the Mall in our nation’s capital. Today, 3 of our 4 billboards were unveiled in the state capital of Texas. What a gut shot to the socialist!”

Democratic Party: “Our party was founded on the conviction that wealth and privilege shouldn’t be an entitlement to rule and the belief that the values of hardworking families are the values that should guide us.”

Let’s have a look at HISTORY:

1. Franklin Delano Roosevelt: “Franklin Roosevelt, the long time hero and standard bearer of the Democrat Party, headed up and implemented one of the most horrible racist policies of the 20th Century – the Japanese Internment Camps during World War II. Roosevelt unilaterally and knowingly enacted Japanese Internment through the use of presidential Executive Orders 9066 and 9102 during the early years of the war. These orders single-handedly led to the imprisonment of an estimated 120,000 law abiding Americans of Japanese ancestry, the overwhelming majority of them natural born second and third generation American citizens. Countless innocents lost their property, fortunes, and, in the case of an unfortunate few, even their lives as a result of Roosevelt’s internment camps, camps that have been accurately described as America’s concentration camps.

“FDR’s “New Deal” program dramatically enlarged the federal government’s power and responsibility, creating our modern welfare and social security programs, beginning a trend that has created an enslavement of millions of Blacks and minorities to the Federal government.

Roosevelt is considered by many to be the “father” of the modern Democratic Party. The Democrats had been the conservative party prior to FDR, but his sweeping liberal reforms made the Democratic Party into the champion of the underprivileged in America!”

Hm … So FDR was a profound “racist” AND the “father” of the modern Democratic Party. Cool beans!

2. Hugo Black: A former Democrat Senator from Alabama and liberal U.S. Supreme Court Justice appointed by FDR, Hugo Black had a lengthy history of hate group activism. Black was a member of the Ku Klux Klan in the 1920’s and gained his legal fame defending Klansmen under prosecution for racial murders. In one prominent case, Black provided legal representation to Klansman Edwin Stephenson for the hate-induced murder of a Catholic priest in Birmingham. A jury composed of several Klan members acquited Stephenson of the murder, reportedly after Black expressed Klan gestures to the jury during the trial. In 1926 Black sought and won election as a Democrat to the United States Senate after campaigning heavily to Klan membership. He is said to have told one Klan audience “I desire to impress upon you as representatives of the real Anglo-Saxon sentiment that must and will control the destinies of the stars and stripes, that I want your counsel.”

Senator Robert Byrd, D-WV: Byrd was a member of the Ku Klux Klan and was the most recent national elected official with a history in the Klan, a well known hate group. Robert C. Byrd, a Pillar of the Senate, Dies at 92 after 51 yrs in the Senate. Byrd was extremely active in the Klan and rose to the rank of “Kleagle,” an official Klan membership recruiter. Byrd once stated that he joined the Klan because it was effective in “promoting traditional American values” Upon Byrd’s death last year, President Obama said of Byrd, “America has lost a voice of principle and reason.”


4. The Republican Party was founded by anti-slavery activists, in contrast to the pro-slavery Democratic Party. It was Abe Lincoln, a Republican President, who led the North to victory in the Civil War and freed the slaves while the Democrats did everything in their power to keep black Americans down.

Fast forward to 1898 in Wilmington, N.C., where Democrats murdered black Republicans so they could stage, “the nation’s only recorded coup d’etat.” Then, in 1922, Democrats in the Senate filibustered a Republican attempt to make lynching a federal crime. While FDR nominated former Klansman Hugo Black to the Supreme Court, while Republican President Dwight Eisenhower, who actually “sent troops” to ensure that schools in Little Rock, Ark., were desegregated and ordered the “complete desegregation of the Armed Forces.” Noticing any trends?

“But, that was such a long time ago, right? Things really changed in the ’60s, didn’t they? Yes, Americans — particularly black Americans — really owe Democratic President Lyndon Johnson a debt of gratitude for destroying American families and causing the number of illegitimate births to skyrocket — by pushing entitlement programs that made it much easier to have children out of wedlock.

“Remember George “segregation now, segregation tomorrow and segregation forever” Wallace standing in the door of an Alabama schoolhouse to keep black children from being able to go to school with whites? George Wallace was a Democrat. Remember Bull Connor turning water hoses and dogs on civil rights protestors? Bull Connor was a Democrat.” MORE HERE 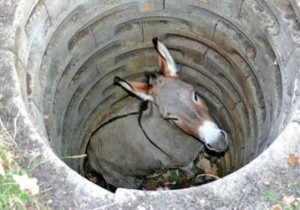 The Democrat Party and the Ku Klux Klan: Aside from the multiple Klan members who have served in elected capacity within the high ranks of the Democrat Party, the political party itself has a lengthy but often overlooked history of involvement with the Ku Klux Klan. Though it has been all but forgotten by the media, the Democrat National Convention of 1924 was host to one of the largest Klan gatherings in American history. Dubbed the “Klanbake convention” at the time, the 1924 Democrat National Convention in New York was dominated by a platform dispute surrounding the Ku Klux Klan. A minority of the delegates to the convention attempted to condemn the hate group in the party’s platform, but found their proposal shot down by Klan supporters within the party. As delegates inside the convention voted in the Klan’s favor, the Klan itself mobilized a celebratory rally outside. On July 4, 1924 one of the largest Klan gatherings ever occurred outside the convention on a field in nearby New Jersey. The event was marked by speakers spewing racial hatred, celebrations of their platform victory in the Democrat Convention, and ended in a cross burning.

6. “Post Civil War Reconstruction remains relevant today because the issues central to it — the role of the federal government in protecting citizens’ rights, and the possibility of economic and racial justice — are still unresolved.” MORE HERE